The artwork for the fourth of our Big Finish Originals has been released! Coming out in September 2018, Shilling & Sixpence Investigate finds David Warner and Celia Imrie united in a murder mystery like no other.

Shilling & Sixpence Investigate, created by Nigel Fairs and directed by Samuel Clemens (son of TV legend Brian Clemens), is coming out in September and we cannot wait for this news series.

Shilling & Sixpence Investigate takes place in a quirky, dark world where nobody is quite whom they seem. Based on a series of murder mystery plays written by Nigel Fairs that have been running for over 21 years, they will be released on audio this September.

The world is about to discover why theatre audiences come back month after month, year after year, for another episode of the thrilling Shilling and Sixpence. David Warner (Titanic, The Omen, Time After Time) and Celia Imrie (Bridget Jones’s Diary, Calendar Girls, The Best Exotic Marigold Hotel), head up an all-star ensemble including Louise Jameson (Doctor Who, Tenko, The Omega Factor, Bergerac), Matthew Waterhouse (Doctor Who) and Samuel Clemens (Gone Fishing, Surgery).

And finally, the cover art for this unique new audio series has been revealed! 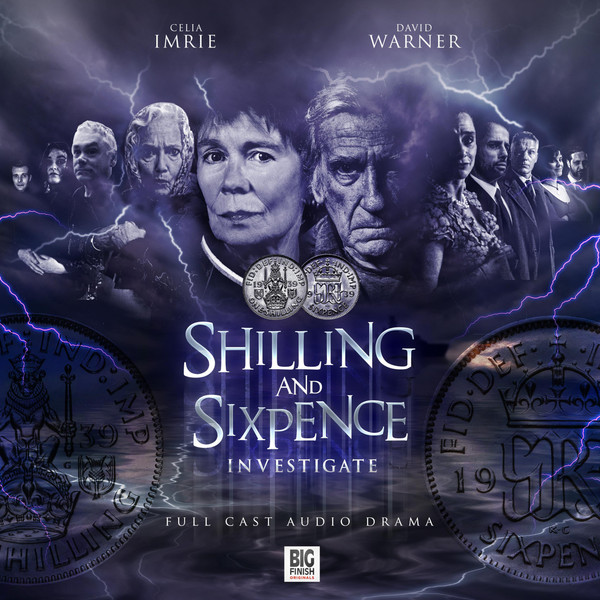 February 1939. Desmund Shilling (David Warner) arrives in Morlington Hill, deep in the heart of Cornwall, having been given the post of Head of English at Morlington School for Girls by the hearty headmistress Lavinia Sixpence (Celia Imrie).

Shilling & Sixpence have four Cornish cases to solve in eight episodes, each written by Nigel Fairs.

1. The Missing Year and 2. Dark Shadows
3. In the Silent Dead of Night and 4. A Very Messy Business
5. An Appointment with God and 6. The Dying Room
7. The Face of an Angel and 8. The Black Widow

Shilling & Sixpence Investigate is available as part of the Big Finish Originals range, a new wave of original drama launched to celebrate 20 years of award-winning audio publishing. The eight-episode series will be available on download from www.bigfinish.com in September 2018 at a pre-order price of £17.

The complete Big Finish Originals range is also available in a pre-order Originals bundle for £120, as well as being available as individual downloads.

Keep checking the Big Finish website for more information on the other upcoming Big Finish Originals.