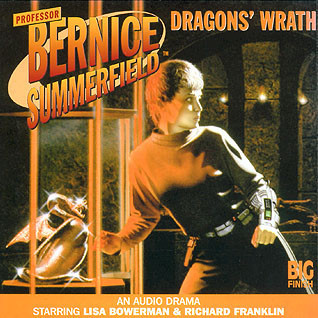 The Gamalian Dragon is ­ a jewel-encrusted statuette captured by the warlord Gamaliel from the legendary Knights of Jeneve after the Battle of Bocaro. It is now sought by Romolo Nusek, apparently Gamaliel's descendent, to prove his right to assume his ancestor's mantle as ruler of the Sector.

When Benny joins a group seeking to find the legendary statuette, she has a secret. No one can possibly find one on Stanturus because she's already carrying it ­ left for her by a murdered colleague.

The trouble is, the expedition does find one and, as a result, most of them are mysteriously slaughtered. Benny realises she and historian Nicholas Clyde must discern the traitor in their midst. Could it be Gilder, the obsequious administrator from Benny's own university? Could it be Truby Kamadrich, the famous archaeologist? Or might it be the bizarre librarian Reddick, who never leaves Nusek's vaults, protected by an inhospitable volcano?

Recorded on: 7 September 1999
This story is based on the original novel of the same name that was part of the New Adventures series of books released by Virgin Publishing Limited.