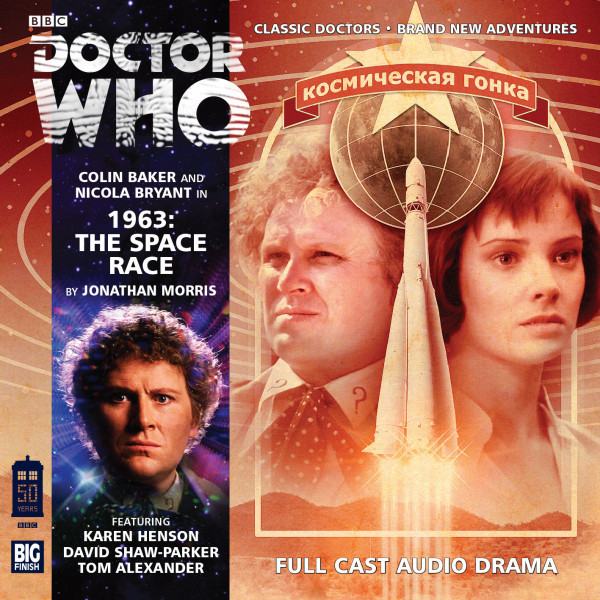 November 1963, and the Soviet space programme reigns supreme. Having sent the first animals, then the first men beyond Earth's atmosphere, now they're sending a manned capsule into orbit around the Moon.

Just as Vostok Seven passes over into the dark side, however, its life support system fails. Only the intervention of the Sixth Doctor and Peri, adopting the identities of scientists from Moscow University, means that contact with the capsule is regained.

But something has happened to the cosmonaut on board. She appears to have lost her memory, and developed extreme claustrophobia. Maybe she’s not quite as human as she used to be…

You’ve written this month’s main range release, Jonny. Can you introduce it for us, please?

1963: The Space Race is a four-part story with the Sixth Doctor and Peri, in which they land themselves in Kazakhstan in early November, 1963, and visit the Baikonur Cosmodrome. They become embroiled in a web of intrigue involving double-agents and murders surrounding the Soviet space programme - and then the story ends up being about something completely different!

How did you approach the story?

The Space Race is a big, solid science fiction tale, in the tradition of Quatermass and the science fiction of Asimov and Clarke. It’s about rockets and pioneers and that whole White Heat of Technology era, where scientists achieved fantastic results with, by our standards, very primitive machines. It involved a bit of research, listening to transcripts of the old Vostok missions in order to get the jargon exactly right.

What are the challenges of writing a new Doctor Who story when you’ve written so many before?

The challenge with writing a Doctor Who story is that, by definition, it has to be a story which ticks all the Doctor Who boxes and which is telling a story which could only be told as a Doctor Who story, but which is different from all the hundreds of stories that are already out there. And in particular which is different from the hundreds of stories written by me. That’s what makes it interesting, to make sure that I never repeat myself, that each story is as far away as possible from the one before; maybe shifting from comedy to something serious, or from something traditional to something more experimental, or from a historical setting to a futuristic setting. So long as it’s entirely different, that’s the main thing. I don’t want to be in the position where I only become known for doing one thing, where people read my name on a release schedule and know what sort of story it’s going to be. I’m always trying to stretch myself as a writer, to go outside my comfort zone, to write more emotionally, more truthfully, and avoid relying on any of the tricks, shortcuts and easy-way-outs that I’ve picked up along the way. And with these two stories in particular, there were aspects of each story which I thought could easily go terribly, terribly wrong, but that’s what makes it interesting, putting yourself in a position where you can fall flat on your face.

Some people write the Doctor the same and rely on the actor, others tailor dialogue to the incarnation; where do you stand? Is it easy to find the voice of established characters like the Doctor and his companions? Do you prefer those or original creations?

I don’t write the Doctors the same. I always have the voice of the actor in mind when writing the dialogue, because they all have their idioms, and there’s always an element of, say, thinking, ‘Colin is really good at doing such-and-such a thing’ so you put more of that thing in the script so he gets to show what he’s capable of. Playing to their strengths, basically.

With companions, again, you have the actors in mind but there is, for want of a better word, a tension between writing the character as they were written back in the Seventies or Eighties and how they would be written now. Because back then characters were sometimes written in quite a functional, perfunctory way, or you’d have them standing around in scenes where they didn’t say anything, or where they’d be hit with an idiot stick in order to suit the plot. And you can’t really get away with that nowadays, I don’t think the people who buy the CDs would stand for it, the actors wouldn’t stand for it, and as a writer you want to make better use of the cast than that.

Regarding original creations, I like to have actor’s voices in mind for those too. For the script I’m writing at the moment I’ve got a print-out of all the actors I would cast in each part, just in order to make their voice consistent, to tune into a performance style. But whether I prefer writing for original creations, I don’t know. I always aim to keep the Doctor and his companion front-and-centre in the story, so they take precedence over any original characters, who are there to serve the plot, primarily, and are defined by their goals, their attitudes.

Do you find inspiration in both the old and new series?

Yes, but I feel that’s a bit of a loaded question. Inspiration can take many forms, and one of the ways is going, ‘Oh, I would have done that differently’. For instance, much as I love Human Nature, the end of the story where the Doctor creates these elaborate (and excessive) punishments for the villains has always felt like a misstep, but it inspired the basic premise of Protect and Survive as that’s a critique of the Doctor acting as judge and executioner. But generally with the new series it’s a case of hoping that they don’t do your brilliant idea first!

Another form it takes is seeing untapped potential; I have a story coming up which is a sequel to a story from the 1970s that I love dearly, but which isn’t particularly highly-regarded because of one or two special effects that didn’t come off. But as a rule, I look for inspiration outside of Doctor Who, in as many diverse places as possible, from surrealist art to articles in New Scientist.

What would be your dream writing assignment?

Something that involves being paid a great deal of money for very, very little actual work. That’s the dream. Either that or a West End musical based on the songs of Hot Chocolate.