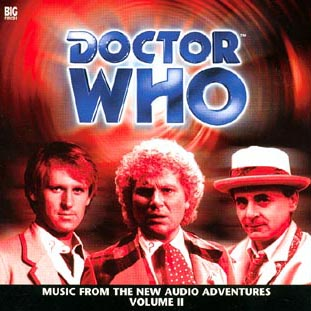 Doctor Who - The Music

2. Doctor Who: Music from the Audio Adventures Volume 02

Featuring the music scores by Alistair Lock from the following Doctor Who Monthly Adventures stories: The Shadow of the Scourge and The Fires of Vulcan, and the DWM exclusive release The Last of the Titans.

With each new Doctor Who story, I am presented with a new challenge. All our audios are recorded in a warm, comfortable studio, so the first of two major hurdles is to create audio environments that sound real and detailed. The second task is to make sure the actors sound as if they are in these environments, not merely pasted in front. This alone involves a lot of work, but even when these two stages are complete, there is still another and that is the music. I try and give each new production a different feel, and the music is a major component of this.

The first story, Last of the Titans, is a deceptively comedic story with a dark twist, set on board a huge empty spaceship. The style of the music in the earlier part of the story owes something to the work of Dudley Simpson in the seventies. As events take a darker turn, so does the music.

The Shadow of the Scourge features aliens who induce fear in the minds of their victims. Apart from one or two more traditional orchestral cues, it was my desire to make the music feel very uncomfortable.

The Fires of Vulcan is an epic tragedy involving the destruction of Pompeii by Vesuvius. The music reflects both the grandeur of the historical event, and its effect on the lives of the individual characters involved. My intention was to evoke a wide screen feel, in both sound and music.

Next release in this range: Doctor Who: Music from the Audio Adventures Volume 03