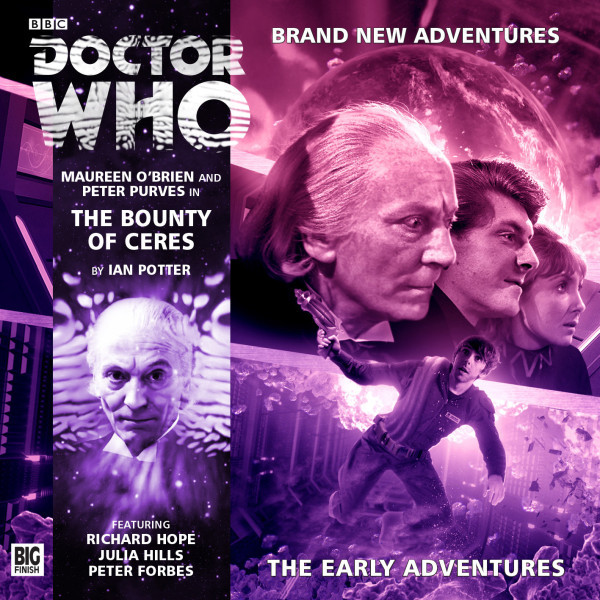 CD + Download
US $18.47
Buy
Download
US $13.54
Buy
Save money with a bundle Login to wishlist
18 Listeners
recommend this

Ceres. A tiny, unforgiving ball of ice and rock hanging between Mars and Jupiter.  It’s no place to live, and it takes a special kind of person to work there.

The crew of the Cobalt Corporation mining base know exactly how deadly the world outside their complex is, but the danger isn’t just outside anymore. The systems they rely on to keep them safe are failing and the planet is breaking in.

When the TARDIS strands Steven, Vicki and the Doctor on the base, they have to fight a foe they can barely comprehend to survive.

The Bounty of Ceres is written by Companion Chronicles veteran, Ian Potter. He said: “The brief initially was, ‘Would I like to write a four-episode Lost Stories-type play for the First Doctor, Steven and Vicki?’ The only other stipulation was that there’d be a guest cast of three per recording day. There are ways to bulk that up, but I suspected the best way to use that for me would be do something in a confined environment with a few characters.

“At the synopsis stage the notion of doing an episode with the Doctor ‘on holiday’ was suggested, which meant there’d be an episode where Peter didn’t have to be playing both roles and we could reduce the amount of narration the story needed.”

Having written for The Companion Chronicles, this was a new experience for Ian, not having been involved in Lost Stories-style tales before. “I have a lot of sequences in low gravity in the story, which I daftly imagine as a mixture of Kirby wirework, filmed inserts done at Ealing, and actors miming floating in close up head and shoulder shots. I even found myself writing a sequence that explained why the Doctor’s hair wasn’t bobbing about in the low gravity.

“That might sound ridiculous, but having sent the Doctor on holiday, I felt I ought to try to be true to some of the other aspects of that era on screen. Given John Wiles’ memory of his lead’s refusal to wear a spacesuit and the way he doesn’t seem to have gone on the trampoline for the teleport scenes in The Daleks’ Master Plan I was sure William Hartnell would have wanted to keep his low gravity acting to a minimum!”

Ian added: “I’ve always loved Vicki as a character because she’s wonderfully fun, occasionally horribly tactless and has a really winning combination of ignorance and wisdom. Steven took me a while to get a hold of as a character. It was only really in The Massacre that I got a really solid idea of him before Big Finish, and more than anything it’s the way he’s been written by Jac Rayner and Simon Guerrier and the superb way Peter has played their words, that have given me a proper way into him.”