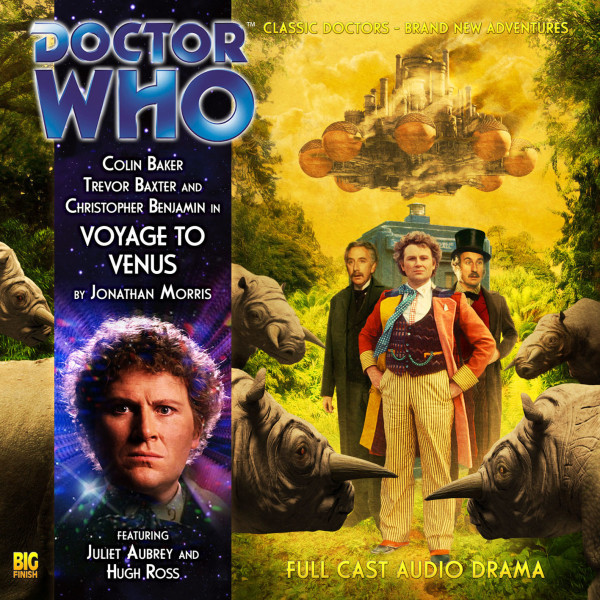 Doctor Who: Voyage to Venus

Download
US $6.01
Buy
Login to wishlist
37 Listeners
recommend this

Professor Litefoot and Henry Gordon Jago are accustomed to the murky fog of Victorian London and the palatable pints of half and half at the Red Tavern. They are not used to travelling through time and space with their old friend the Doctor.

And now they find themselves whisked off to the planet Venus in the distant future, at a time when warrior women rule from a floating city in the clouds. There’s a mystery here, one that the Grand Empress Vulpina intends to keep secret. Even if it means destroying these visitors from the long-dead planet Earth...

Jago and Litefoot are now TARDIS travellers! Writer Jonathan Morris reveals his inspirations for sending the intrepid investigators to Venus with the Sixth Doctor

Professor George Litefoot and Henry Gordon Jago have faced many freakish, fearsome foes and experienced many exciting, extraordinary exploits. First of all, of course, there was that business with the despicable Weng-Chiang, and the affair with The Mahogany Murders (or The Mahogany Murderers, nobody was ever completely sure). Then along came the fiendish Doctor Tulp and the devious Gabriel Sanders, followed by the nightmarish Wet Men, the mysterious Man At The End Of The Garden and all those giant metal spheres, not to mention the noble savage, Leela. And then, most recently, our gallant heroes encountered haunted mirrors, exchanged quips with Oscar Wilde, resolved a time-loop on the London Underground, defeated the sinister Sand Men and unmasked the enigmatic Claudius Dark. What else was left for them to do but to explore outer space?
And that’s where Voyage to Venus picks up, as Litefoot and Jago have finally stepped on board the TARDIS for a tour of the wonders of the universe with the Sixth Doctor. But where, in all the universe, would they go?
The planet Venus seemed the perfect destination for a couple of reasons. Firstly, it wouldn’t feel right to feature Litefoot and Jago in an out-and-out modern science fiction adventure. No, they should have an adventure with a Victorian sensibility, reflecting the concerns of that time (colonialism, class, female emancipation, eugenics) and informed by the science fiction of that time; HG Wells and Jules Verne, as well as slightly later authors such as Edgar Rice Burroughs, CS Lewis and Olaf Stapledon. But it wouldn’t be ‘steampunk’; those authors wouldn’t have considered their work to be steampunk but based on the very latest scientific knowledge, so I decided to follow suit and draw my inspiration from New Scientist rather than brass rivets.
The second reason why Venus appealed was that it’s always had a kind of background presence in Doctor Who lore. We’ve never seen the Doctor visit the planet, but it’s been mentioned on numerous occasions: Susan alluding to its ‘metal seas’, the Third Doctor practising Venusian aikido, singing Venusian lullabies and playing Venusian hopscotch, as well as referring to its inhabitants, the Thraskins (also known as Plinges) and the Shanghorns (which should never be trusted with a Perigosto stick). So there was all sorts of stuff to have fun with and try to work into my story. And, of course, I had to throw a few even more obscure references in there as well.
Having decided on Venus, I then had to come up with a story. Clearly it wouldn’t be much fun to set it on a world with a searing hot, dense and unbreathable atmosphere, so instead I followed the lead of those early science fiction novels and imagined Venus as a tropical paradise. And of course, being named after the Roman goddess of love, it would have to be ruled entirely by women (which would also help balance out a cast with three male leads). But rather than go down the corsets-and-kinky-boots route of all those Fifties B-movies, I was determined to do something a little more subversive and science fiction with the idea. I’m particularly proud of the explanation of what became of all the Venusian men.
Once I had a setting, and a plot driven by a powerful female villain (the Grand Empress Vulpina) it was simply a matter of imagining the characters of Litefoot, Jago and the Doctor in those situations and writing down what they would say. Litefoot and Jago are such well-drawn characters – and have such distinctive voices, thanks to Trevor Baxter and Christopher Benjamin – that the challenge is not so much a matter of thinking of things for them to say as a matter of trying to get them to shut up so somebody else can get a word in edgeways! Fortunately, that’s not much of a problem with the Sixth Doctor, who was never exactly one to politely wait his turn in conversation.
I can honestly say that this story is one of the most enjoyable things I’ve ever written. I couldn’t wait to sit down and write the next bit; I could quite easily have gone on for another hour or so. The risk, that I was very aware of, was that by taking Litefoot and Jago out of the Victorian era it would undermine their characters or feel jarring, but the solution was clear: Litefoot and Jago may travel to alien worlds in the far-flung future, but they will always take a nineteenth century worldview with them.
And of course – of course – it had to be called Voyage to Venus. It had to be a title that you could imagine on a pulpy Edgar Rice Burroughs paperback, but also a title that you could imagine Henry Gordon Jago using to describe his adventure. So “Roll up, roll up, for the trip of lifetime! The magnificent, the marvellous… Voyage to Venus!”