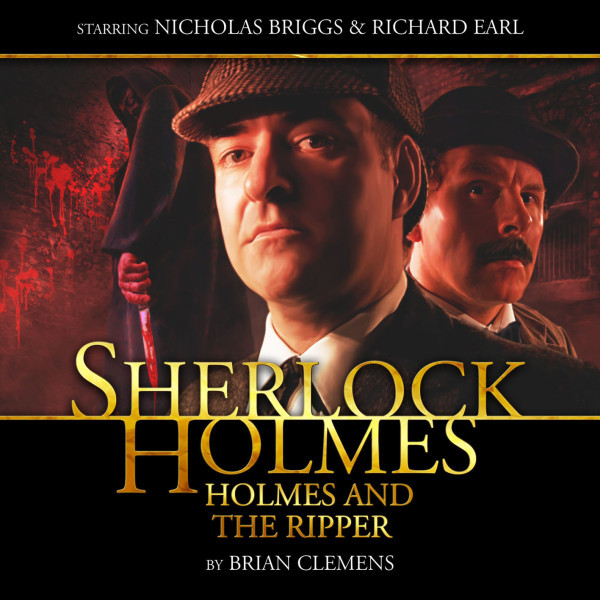 1.3. Sherlock Holmes: Holmes and the Ripper

Download
US $6.12
Buy
Save money with a bundle Login to wishlist
13 Listeners
recommend this

The grisly serial killings of prostitutes and vulnerable women in Victorian Whitechapel, dubbed by the popular press as the work of 'Jack the Ripper', are the talk of London, and from deep within the smog-ridden slums, yet another piercing shriek is heard.

Sherlock Holmes and Dr John H Watson are drawn into one of the darkest plots ever to shake the foundations of England. There are freemasons, conspiracies and plots at the highest level of the establishment.

But for Holmes, there is a uniquely personal element to this new and terrifying case…

What the papers said about Nick Briggs as Holmes in the stage production of Holmes and the Ripper:

‘Briggs stole the show, with a Holmes portrayal that hovered between Jeremy Brett and Peter Cushing… the hawkish and slightly arrogant Brett influence prevailed, but Briggs cleverly injected a little humour and warmth into the part’ Zena Hawley Derby Evening Telegraph.

‘Holmes has been a passion of mine since childhood. Naturally, I watched all the Basil Rathbone movies and like many Holmes fans regard the late, great Jeremy Brett’s performance as definitive. But there have been many great interpretations of Holmes. I’m rather fond of Peter Cushing in the role, for example. But I have to say that when I chanced upon Roger Llewellyn’s performance in his solo shows The Last Act and The Death and Life, I was mightily impressed. Roger brings a real depth, passion and pathos to the character.
‘My own acting association with the part started in 1999, at exactly the time I was working on our first Doctor Who audio play, The Sirens of Time. I was offered and accepted the part of Holmes in a production Conan Doyle’s play The Speckled Band (at the Drayton Court Theatre). It gave me a real taste for the part, but it wasn’t until 2008 that I got the chance to play Holmes again, in a production of Brian Clemens’s Holmes and the Ripper at the Theatre Royal Nottingham. The production was such a success that I was invited to return to the role in 2009, and asked to write an adaptation of The Hound of the Baskervilles.’

The real revelation is Nicholas Briggs's performance as Holmes. Confident and assured, yet understated, and shot through with just the right amount of emotion, bravado and eccentricity, Briggs has delivered one of the definitive portrayals of the character... along with Rathbone, Brett and Lewellyn.

Briggs, who had played Holmes on stage with style and authority, takes the lead in the rest of the Big Finish productions, with Richard Earl as his stalwart Watson.