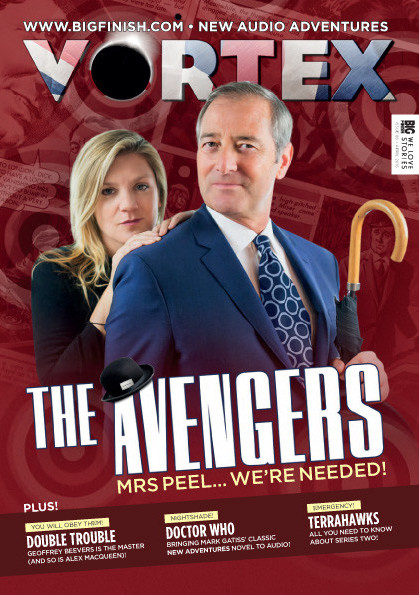 We welcome cult TV icon Mrs Emma Peel into the Big Finish family, as Olivia Poulet teams up with Julian Wadham for four stories in The Avengers - Steed and Mrs Peel - Comic Strip Adaptations Volume 1. Vortex takes a trip to studio to see how it was all put together.

It's been much discussed and anticipated ever since being announced, and now finally our Doctor Who - The Two Masters trilogy kicks off with this month's Doctor Who - And You Will Obey Me. Alex Macqueen and Geoffrey Beevers discuss their part in this unique event. It's event television - on audio!

It's time for a trip to the past via a brand new release as Mark Gatiss' Doctor Who - Nightshade novel gets the Novel Adaptations treatment. Vortex talks to everyone involved, including director Scott Handcock, and Mark himself.

Vortex editor Kenny Smith gets to live the dream as he follows the creation of brand new Terrahawks episodes, ahead of this month's release of Terrahawks - Volume 2. Producer and director Jamie Anderson is interviewed, along with his happy cast, about eight brand new adventures

Ahead of Sheridan Smith's return this month to Big Finish with Doctor Who - The Curse of the Fugue, we go back in time to 2008 when she teamed up with the Eighth Doctor Paul McGann on Doctor Who - Grand Theft Cosmos, looking at what went into a story which will be £2.99 on download for the whole of April...