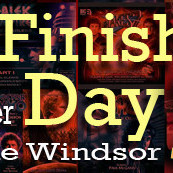 Big Finish's seventh celebration day, bringing together the cast and crew of your favourite audios.

For Big Finish Day 7, we're proud to be celebrating the launch of a range of exciting new stories, with special guests from across all our September releases - Saturday the 19th of September 2015, Copthorne Hotel Slough-Windsor.

Guest of honour is Colin Baker, who will be joining us to discuss Doctor Who: The Sixth Doctor - The Last Adventure, which tells the tale of ol' Sixie's final battle with the Valeyard – performed by Michael Jayston, who has just been announced to be attending the weekend. They'll be joined by companions Lisa Greenwood (Flip Jackson) and India Fisher (Charlotte Pollard).

And of course, the Big Finish stall will be packed with a bounty of new releases and special offers from across all our ranges!

For more information and tickets, check out the 10th Planet Website: http://www.tenthplanetevents.co.uk/conventions---big-finish-day-7-773-c.asp