Guess who’s back? Back again. The down-to-earth Ninth Doctor returns for a brand-new box set of full-cast audio dramas, due for release in May 2022 from Big Finish Productions.

Time and again, the Doctor finds himself returning to his favourite planet. Dropping in on history or the present-day, whether it’s kings, commuters or ordinary people, he’s never met anyone who wasn’t important...

Christopher Eccleston reprises the role of the Ninth incarnation of the Doctor, first seen on BBC television in 2005, to embark on three Earth-based adventures. He encounters a fairytale-esque villain, travels to Moscow in 1605 and, in the closing story, crashes a family’s New Year’s gathering.

Doctor Who — The Ninth Doctor Adventures: Back to Earth is now available to pre-order as a collector’s edition CD box set (+ download for just £24.99) or on download (for just £19.99) exclusively here.

The three fantastic stories included in this box set are as follows: 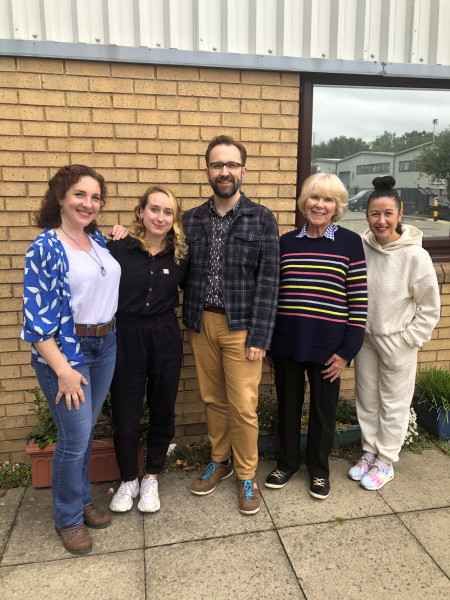 Actress Hayley Tamaddon said: “I thought the script was absolutely brilliant and I loved every second of playing Auntie Sue — she was right up my street. She’s a giddy, loveable, warm Northern lady who’s got bags of energy. I think she’s just me in about ten years.

“She really loves her family but she’s not afraid to say that she thinks the Doctor’s a bit dishy. Personally, I think Auntie Sue would completely run off with the Doctor around the cosmos.

“I was obsessed with Doctor Who as a child, I absolutely loved it. So, I’ve had a ball with Christopher Eccleston. It feels like we’ve bonded as people and as characters in a very short space of time.”

Director Helen Goldwyn said: “Tim Foley’s Auld Lang Syne is a wonderful and really special script. I knew for Auntie Sue I wanted to cast someone who was grounded but also had that blousy hectic energy about them. Every line that Hayley Tamaddon said was so perfectly pitched.”

Doctor Who — The Ninth Doctor Adventures: Back to Earth is now available to pre-order for just £24.99 (CD + download) or £19.99 (download only), exclusively from the Big Finish website.

Big Finish listeners can save money by pre-ordering all four volumes of The Ninth Doctor Adventures series two together in a bundle at £88 (on CD + download) or £78 (download only).

Doctor Who – The Ninth Doctor Adventures triple LP vinyls are strictly limited to a pressing of 1,000 per volume, and can be ordered at £35.99 each, or £132 for the bundle of all four albums, again exclusively at the Big Finish website.

Please note: the vinyl editions do not include any behind-the-scenes extras. However, listeners purchasing vinyl LP editions will receive a download of the story automatically and be given access to the CD edits as a bonus download. Episodes will be edited specifically for the vinyl format, presented as 2 episodes, one on each side, each with opening and closing music. In addition, all pre-orders of the vinyl will also receive the behind the extras as a bonus download.

Products are sold in £ sterling on Big Finish’s website but will be converted to local currency upon checkout.