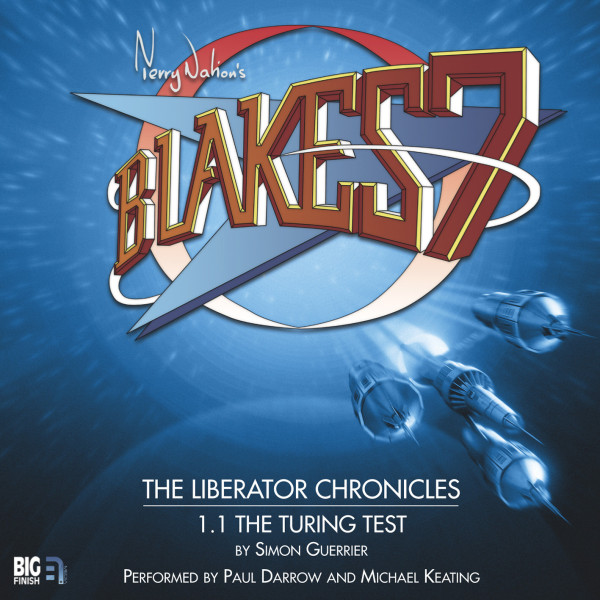 1.1 The Turing Test by Simon Guerrier
Avon and Vila go undercover at a top-secret research establishment.

An adventure taken from Blake's 7: The Liberator Chronicles Volume 01.

CALLING AVON
Big Finish launches a brand new series of Blake’s 7 adventures. Who better to talk about them than Avon himself, Paul Darrow? Paul Spragg gave him a ring…

Hello Paul. What got you on board for new Blake’s 7 audios?
Jason Haigh-Ellery, I’ve known for a long time. We get on very well and I’ve done Doctor Who for him, another thing with David Tennant [The Adventures of Luther Arkwright] a few years ago, and I like working for them. I think a lot of people do. It’s fun. And I like Lisa Bowerman very much, who directs, and [producer] David Richardson. We get on well, and that’s very important, I think. That’s one of the things that made Blake’s 7 a success in its original format, simply on the basis that it was a group of people that happened to get on very well, who clicked. That’s essential, of course, for any television show or media show. That’s what appealed to me about working with the people at Big Finish.

Has the character of Avon ever really left you?
That’s a very good question and a tough one to answer. I suppose it’s never really left me in a way; a part, by a process of osmosis, inculcates itself into your psyche. Gosh, that sounds highfalutin, doesn’t it! It’s always with you to an extent if you play it for a long period of time. I remember Jeremy Brett, alas no longer with us, became very much associated with the persona of Sherlock Holmes when he played him. I think yes, to a certain extent, it does linger. I do have a reputation as an actor of playing ‘hard’ roles, and one of the greatest compliments I got was when I played the Scottish Gentleman by Mr Shakespeare, and my wife was sitting in the audience by a young fellow on a school outing or something, and he turned around to his mate when I was on stage and said, ‘Well ‘ard, isn’t he?’ And I thought, ‘Well, that’s a compliment.’ So I tend to get those roles, although I’m not like that in real life.

Is it good to get an iconic, memorable role, or can it be confining for an actor?
Both, really. It can confine you. I’ve been fortunate, touch wood, insomuch that it hasn’t entirely. And anyway, if you do play that kind of character, the hard bad guy if you like – although I don’t think Avon was a bad guy, he was just misunderstood – what happens is you get offered similar roles. Humphrey Bogart nine times out of ten was playing a tough gangster or a cop, and there’s nothing wrong with that.

What’s it like being back in the role?
Oh, interesting. Very interesting. The scripts are good, although there was one I didn’t understand at all! It was a bit technical. David Maloney, the producer of Blake’s 7, said to me once, when I had a longish speech, ‘Do you know what this means?’ It was technical stuff. And I said, ‘No, I haven’t the foggiest.’ And he said, ‘Well, apparently it’s accurate scientific speculation, what do you want to do?’ And I said, ‘Well, I’ll say it and see what happens.’ And after we’d finished the scene David Maloney turned round and said, ‘Well, you convinced me you knew what you were talking about, so we’ll leave it in!’ I think the writers have got the character pretty much down. And I said to David Richardson, when it first started, ‘It’s been a long time, I wonder if I sound the same?’ And he said, ‘Oh yes. Yes you do.’ So I said, All right, okay.’ That’s what smoking does for you, I suppose!

Does it feel authentic to the original show?
Pretty much got it down, I think. They’ve set stories in the first series so you have the entire original cast, as it were. It would be tricky to write it later on because of the characters. For example, the Avon character became much more – I hate to use the word, but to an extent psychotic. He wasn’t a psychopath but he did have symptoms and the reason, I would claim, is because I had to get round various storyline obstacles. For example, in the original series when Tarrant and Dayna arrive, Avon programs them into the Liberator’s computer, Orac. And I said to the producer, ‘He would never do that, opting to give anyone else control’. And the producer turned round and said, ‘Well, look, put it this way, Paul: if you don’t, we haven’t got a series because they can’t be in it.’ So I had to find a way round that; why would he let them when you wouldn’t under normal circumstances? I wouldn’t, personally, if I had to fly a spaceship through the universe. With all due respect to you, Paul, I wouldn’t program you into it to encourage you to nick it off me!
I was in a fortunate position because, not playing the eponymous hero, I didn’t have to behave as a hero is supposed to behave. I remember somebody once writing – I think it was Alexander Walker in the Evening Standard – about the Bonds and saying ‘The difference between Sean Connery as Bond and Roger Moore as Bond was that if they were playing a tennis match, Roger Moore’s Bond would say ‘May the best man win’ and Sean Connery’s Bond would say the same thing – and then kick him in the crotch just to make sure’. And that’s how I decided to play Avon. Kick him in the crotch and make sure. People are interested in that because that’s what you’d do.
I remember while we were doing the show; it was quite by accident, the director said, ‘I’ve got the camera on tracks’ – we were on location – ‘and it’s very difficult to turn round, and there are these two guards but they’ve got their backs to you, so you’d better put in a line where you call out and they’ll turn around.’ And I said, ‘Why?’ And he said, ‘You’d do that, wouldn’t you?’ And I said, ‘Well, I wouldn’t and Avon certainly wouldn’t! I’d shoot them in the back! Why give them a chance?’ So he said, ‘All right then,’ so I did! I shot them in the back. Let’s face it, if you’re up against them and you know they’re pretty good and they’re armed, you’re not going to give them a chance are you?

What would you say to encourage people to pick up Blake’s 7?
I need the money! [laughs] So does Jason, so does everybody. So do you! The popularity of the show extends to the present day; there’s no doubt about that. I still get, not as much as I used to, but a fair amount of fan mail. People stop me in the street. I changed dentists just before Christmas because I thought, ‘Why am I going miles away to a dentist when there’s one down the road who’s very good?’ So I went in there and the dental nurse just looked at me and said, ‘Oh, I used to have a picture of you on my wall.’ And I said, ‘What happened to it?’ and she said, ‘Well, I had to take it down when I got married!’ So I said, ‘You should have kept it, waited until I’m dead, put it on eBay…’
So it’s still a familiar show. The original fans, most certainly I would think, would flock to it. I do a thing, it’s called An Evening with Paul Darrow, and it’s a group of people who come along and we have a private room, we have dinner, then I get up and talk, and a lot of people who come on a frequent basis, we’ve become friends, and I was telling them all about it and they were very enthusiastic. Not all of them are necessarily Blake’s 7 fans. People who come to my evenings, for instance; somebody came from Switzerland. Somebody came from Australia – admittedly not just for the evening. Some Americans came. They go, ‘What’s happening?’ and they don’t know [about the audios], so I have informed them!
I go out and buy stuff that I liked from way back. Old movies, for instance, I get a lot of. I have IT ignorance – which is a sad admission to make considering I was supposed to be a superb computer expert! – and I’ve got a new laptop: Windows 7, excitement all round! Someone has very kindly put me on Amazon so that I can go on there and get stuff, and I’m trawling through Amazon now for some movies I want.

I think the key thing about these recordings is the enjoyment, certainly that I had doing them, and I think enjoyment communicates itself to the listener. It certainly did to the viewer all those years ago, and I think it will communicate itself to the listener. Because people tend not to listen just once; that’s the trick, isn’t it? You want to hear it again. So there you go. It stays with you. It stays with me, and I was in it. People who watched it and enjoyed it, I think it stays with them. Certainly with the dental nurse, anyway…