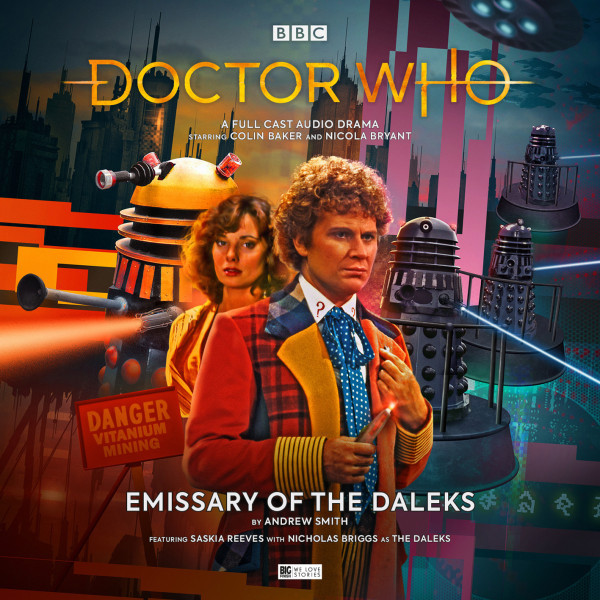 254. Doctor Who: Emissary of the Daleks

On the planet Omnia, a young man leads the Doctor and Peri through the battle-scarred ruins of a city. Among the rubble he shows them proof that their invaders and new masters, thought to be invincible, can be defeated. The proof is the blasted, burnt-out remains of a Dalek.

But this is a Dalek-occupied world like few others. For one thing, there are few Daleks to be seen. And for another, the Daleks have appointed an Omnian, Magister Carmen Rega, to govern the planet as their emissary.

Why are the Daleks not present in force? And can the Doctor and Peri risk helping the Omnians, when the least show of resistance will be met with devastating reprisals from space?

I was delighted when John Ainsworth asked me to write a Dalek story for Colin and Nicola for the monthly range. It seemed like a natural successor to my last monthly range script, Hour of the Cybermen, which had Ol’ Sixie pitched against his other arch enemies from way back.

I was given a wide brief, any setting I liked, and I went for an off-Earth story which has its basis in a tactic of the Persian Empire. They would conquer a territory then put a plenipotentiary or emissary in place as its ruler. The population would be treated relatively well, on condition that there were no attempts at rebellion. If there were, the Persians would return and be totally merciless in not just quelling the rebellion but taking cruel revenge on the population. It was a very successful tactic in keeping conquered cities in line.

So I envisaged a world taken over by the Daleks with one of these emissaries in charge. An emissary with the principle objective of ensuring there’s no dissent. Because if there is, the Dalek reprisal will be terrible. And what would the Doctor and Peri do, coming into this setup? Would the Doctor want - or be able - to quell his usual instinct to foment rebellion and overturn Dalek rule?

I’d written Daleks before, for the War Doctor range, and found them great fun to do. This was my first time telling a standalone Dalek story of this length, and again it was a treat. It’s just not possible to write ‘Exterminate!’ without smiling.

Even more of a treat is writing for Colin. I’ve written four or five stories for him now, and I just love his Doctor and what he does with him in the studio. To get to write for him and Nicola again, my first Sixie and Peri adventure since The First Sontarans in 2012, was the icing on the writing cake.

The Daleks are iconic of course, and were a highlight of my Doctor Who viewing as a child. I particularly remember 9-year-old me’s excited anticipation of their return in Day of the Daleks after an absence of many years. That remains one of my top favourite Doctor Who stories. It’s also one that, like Emissary, features a representative of the Daleks, the Controller, running a totalitarian state in their name. Which provides a satisfying if tenuous link to my story, while also setting a precedent for the use of this tactic by the Daleks.