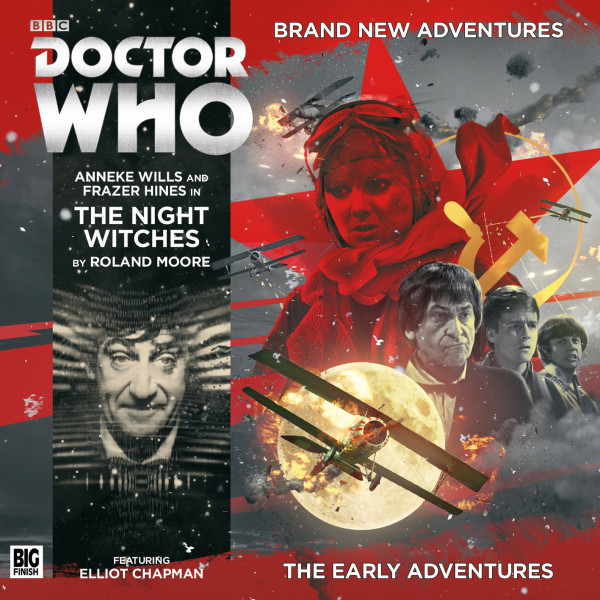 4.1. Doctor Who: The Night Witches

Download
US $13.47
Buy
Save money with a bundle Login to wishlist
22 Listeners
recommend this

When the TARDIS materialises north of Stalingrad in 1942, the Doctor, Jamie, Ben and Polly are captured by the Night Witches, an all-female unit of flyers tasked with disrupting the German forces nearing Moscow.

They suspect that the travellers are spies - part of the Germans’ Operation Barbarossa. Despite their pleas they are locked up while it is decided what to do with them.

Polly, however, is receiving strange looks from the pilots and clearly unnerving them. When the TARDIS crew discover why this is, it becomes clear that they’re about to get far more involved in the war than they could possibly have imagined.

One of the best recreations of the period that Big Finish has done, this is an excellent addition to the stories featuring the TARDIS crew of the very early Troughton years… An excellent start to the new Early Adventures. 10/10

A cracking start to a new series and a fab reboot of one of my favourite genres – a well deserved 9/10.

This new series of Early Adventures is a great place to kick off if you are yet to hear any. Series 4 is off to a great start and I would recommend this release to everyone. Best enjoyed with a warm drink.

The Night Witches is a culmination of everything that makes a great historical Doctor Who story. It features brilliant writing from Roland Moore, tight direction from Helen Goldwyn and terrific performances from a terrific cast. Everyone involved should be so very proud. 10/10

Not only is The Night Witches a solid continuation of what’s great about the Troughton era of Who, then, but it also adds some progressive twists to its style of story and allows all the companions to shine; a very solid Big Finish debut from Roland Moore.