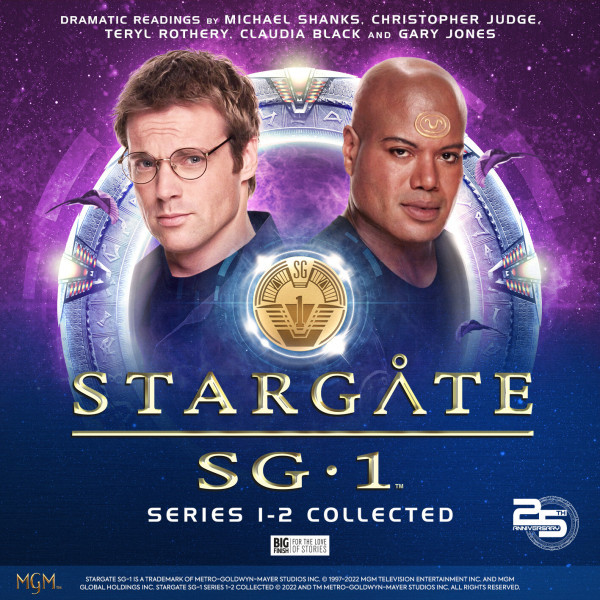 Download
US $30.94
Buy
Save money with a bundle Login to wishlist
15 Listeners
recommend this

Follow the team from SG-1 as they travel through the Stargate to new worlds, battling alien foes and strange phenomena along the way.

1.1 Gift of the Gods by Sally Malcolm
Doctor Daniel Jackson wakes up on the floor of his SGC lab, with no memory of what happened or how he got there. Why can no one remember what happened? And why is the Stargate apparently connected to an alternate reality?

1.2 Shell Game by James Swallow
Vala Mal Doran finds herself in a particularly sticky situation when an old foe catches up with her. With only Daniel Jackson able to fight her corner, Vala may have to do something that's really not her style - tell the truth.

1.3 Savarna by Sally Malcolm
Returning from a mercy mission, the Prometheus is attacked and Doctor Janet Fraiser is kidnapped. Finding herself amongst a crew of outlaws, the Doctor must treat a desperately ill patient and keep herself alive. But are things all that they seem?

2.1 First Prime by James Swallow
Teal’c’s past as First Prime of Apophis comes back to haunt him when Colonel O’Neill and Daniel Jackson are taken captive by the system lord’s forces. As Teal’c struggles to free them, he finds himself confronted by an old friend and fellow Jaffa, Sebe’t. Can this warrior really be trusted? Or has Teal’c reopened an old wound that can never be healed?

2.2 Pathogen by Sharon Gosling
SG-1 runs into trouble when the team triggers a Goa'uld trap meant for grave robbers. Infected by an unknown pathogen, Colonel O'Neill sends for help. It arrives in the form of Dr Janet Fraiser, but when did any rescue ever go smoothly?

2.3 Lines of Communication by Luke Mansell
Chief Master Sergeant Harriman settles in for a quiet night shift at Stargate Command. But when a routine gate diagnostic triggers an attack that traps him in the control room, things look set to be anything but quiet...

Please note: these stories were originally published in 2008 and 2009, and were previously available to purchase individually from Big Finish.

1.1 Gift of the Gods
This story takes place during season three, before Fair Game.

1.2 Shell Game
This story takes place during season ten, after The Pegasus Project.

1.3 Savarna
This story takes place in season seven, before Heroes.