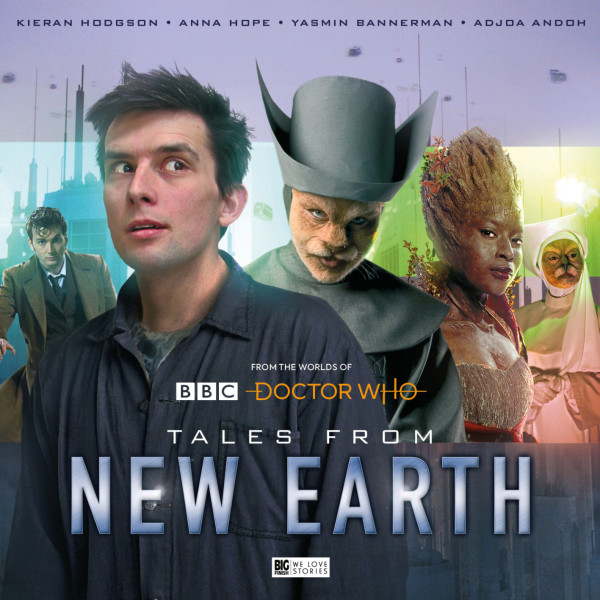 Login to wishlist
13 Listeners
recommend this

This free download of Tales from New Earth was available with an exclusive access code to purchasers of the deluxe edition of Doctor Who Magazine #539, in stores from 30th May 2019.  This special offer expired at 23:59 (UK time) on 31st July 2019.

Four adventures from the New Earth setting of TV's episodes The End of the World, New Earth and Gridlock:

Five billion years in the future, after the end of the world in the year 5.5/apple/26: New Earth is the second hope of humankind.

Post-Gridlock, Senator Hame is working to restore her home. The cities, forests and skies teem with strange and wonderful species. Some trace their ancestry back to Old Earth, others came later, but all have their own agendas, and their rivalries.

Now an ancient, powerful force has New Earth in its sights, and everyone must work together to beat it...

Devon Pryce has lived all his life in the high rises of New New York. A child of the Elevator Guild, he now receives a new calling - from a cat.

Senator Hame is trying to rebuild society, to make it stronger for future generations, but there are those who would stand in her way.

There is a new danger on New Earth, and Devon's work is only just beginning...

1.2 Death in the New Forest by Roland Moore

On his first mission for Senator Hame, Devon crosses continents to arrive in the New Forest and meet its people.

Trees are dying of unnatural causes. Sapling Vale, a cutting of the noble Jabe of the Forest of Cheem, will help Devon investigate the threat to her people.

So too will an alien, an old friend of New Earth... a time traveller known as the Doctor!

1.3 The Skies of New Earth by Paul Morris

Devon's work takes him into the skies of New Earth and the great floating city of New Caelum.

Here, a new energy project is exploited by alien powers, and a terrible catastrophe looms. Helped once again by the Doctor, Devon calls on the Bird People of Nest City, as well as the great Solar Bears on their Ice Clouds to stop disaster.

But can the people of the skies put aside their rivalries long enough to make a difference?

1.4 The Cats of New Cairo by Matt Fitton

Senator Hame is summoned to New Cairo by the spiritual leader of Catkind: the Most Exalted High Persian - a personage of great power and wisdom - to report on her investigations.

Here, the camel-like Dromedans still worship Catkind, in the shadows of vast Octahedrons and temples of light. But Hame and Devon have uncovered a conspiracy that threatens the future of everyone on the planet.

The battle for control of New Earth is about to begin...

Shop all audiobooks
Previous release in this range: Tales from New Earth