We're kicking off the new year with a bang as the first 2019 release of the Doctor Who Main Range is out now. The Fifth Doctor, Tegan and Turlough are joined by Kamelion, voiced by legendary impressionist Jon Culshaw, in Devil in the Mist.

The TARDIS deposits the Doctor, Tegan, Turlough and their android ally Kamelion aboard a prison ship. A ship with just one prisoner: Nustanu, last warlord of the Zamglitti – monstrous, mind-bending mimics able to turn themselves into mist.
A ship that's in trouble, and about to make a crash-landing...
On a planet of mists.

Writer Cavan Scott tells us more about this new trilogy, "Writing for Kamelion was too good an opportunity to miss. I’m a sucker for robots and the great thing about Kamelion is that he’s such a blank canvas. We never really got to know him on TV, mainly because the prop didn’t work. So it meant that we could take everyone’s favourite shape-shifting robot in whatever direction we wanted, unfettered with what’s gone before. It was remarkably freeing!

"And of course he also upsets an already fractious TARDIS team. Part of my brief was to deal with Tegan’s obvious prejudice against him, which actually provided the spark for my story."

Devil in the Mist is available now at £14.99 on CD or £12.99 on download. All CD purchases unlock a download option via the Big Finish app and the Big Finish website.

1902. Deep beneath the Welsh village of Abertysswg, men have worked the black seam for generations. Until the day of the disaster. The day that a blue box from the future materialised inside the mine.... and things would never be the same again.

Welcome to the Incredible Power Game, in which three brave Earthlings enter the Void Pit in search of strange gems to help return the alien Hostess to her home dimension. Today's contestants include Graham, Sadia... and Tegan, an air stewardess from Brisbane!

Plus, revealed today is the artwork for the first in a trilogy of adventures with the Seventh Doctor and Mags, starting in April 2019, The Monsters of Gokroth. 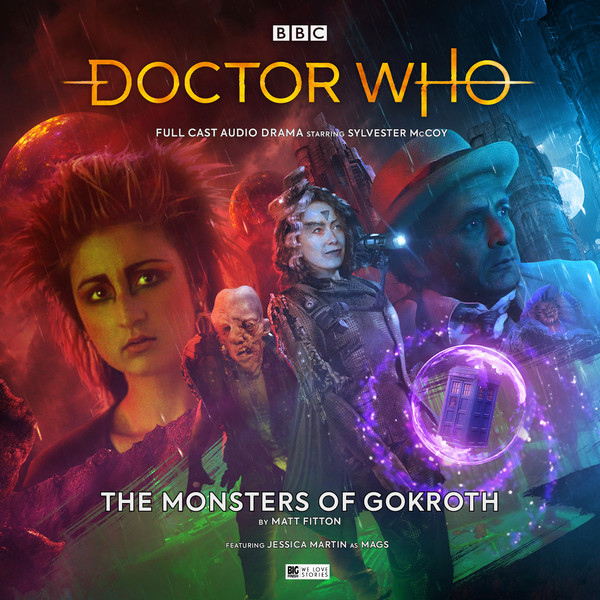 Three new Main Range adventures will reunite the Seventh Doctor and his friend, Mags, the punk werewolf circus performer first seen in 1988’s Doctor Who story The Greatest Show in the Galaxy. Alongside Sylvester McCoy, Jessica Martin reprises her role of Mags in this trilogy of terrifying tales… the first arriving in April.