Recreating the sound of World War Two on the new Big Finish Originals series ATA Girl proved a challenge, but what about recreating the look of the time? Artist Tom Newson tells us about the cover art which brought these forgotten war heroes back to life.

The first of our new Big Finish Originals range, ATA Girl is a fictionalised full-cast audio drama series inspired by the heroic female pilots of the Air Transport Auxiliary during WW2.

Today we’ve asked Tom Newsom to tell us everything about his cover artwork: 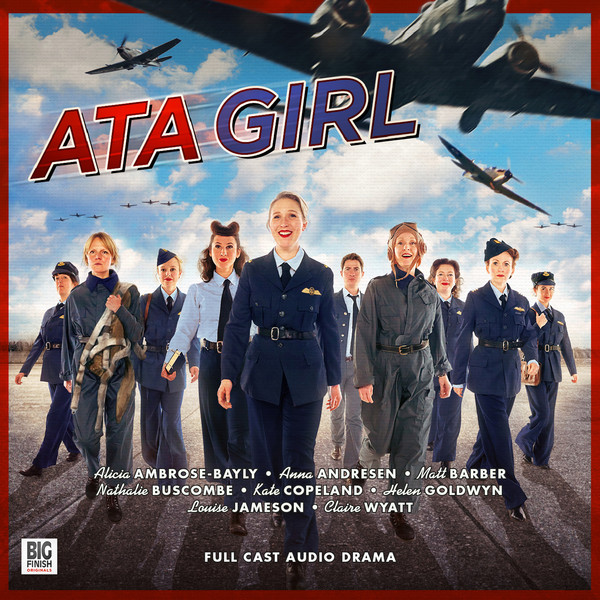 How important and how much of a challenge was making sure the cover images were historically accurate?

“One of the aims of the production was to be faithful to the era, and I wanted the design to match the attention to detail elsewhere.

“This meant lots of research – not always required when designing! But in this case, it meant digging out as many photos from that point in history as I could find. Not only did the cast have to look like they were dressed for the ATA, but also the cover artwork had to have the same sepia glow as the old colour photos at that time – and yes, I was surprised too by just how many colour photos there are around from the 1940s.

“It was a challenge to get the outfits right, but I wanted them to be as accurate as I could get them. The photos at the recording had the cast dressed up in the amazing period RAF styles, but there were still extra details I had to add, from the yellow ATA badges and distinctive hats, down to the exact colour blue of the shirts and suits of the uniforms.”

How involved was the production team (Louise Jameson and Helen Goldwyn) in the creation of the images and the art direction?

“The idea behind the cover came from the production team, which I was on board with from the start – the characters walking towards the camera is a simple idea but works with this sort of release. Plus, there were photos of actual ATA recruits doing the very same thing!

“This was all worked out before recording, which meant photos of the cast could be taken in the right poses and outfits – it’s the sort of artwork that would have been impossible to create without planning it out in advance.”

Were there many major challenges creating the artwork?

“Aside from getting the costumes accurate (I know far more about RAF belt buckles than I ever thought I would!), the main challenge was getting as many cast members on the artwork – plus the planes. Ten actors might be a Big Finish record (though Blake’s 7 might come close). I worked with the production team to try and get the main characters on there, and because the four stories in the series are all centred around women, almost all of them are female characters.”

How did you feel bringing to life these forgotten heroines from history to life?

“It was a great honour to be part of it. I must admit, it wasn’t until I researched it that I realised the scale of it all – it’s not a part of history that’s in the public consciousness like the Battle of Britain or Bletchley Park. The sorts of jobs that the pilots with the ATA were risking their lives doing in order to help the war effort over the years… they deserve to be recognised – both the male and female recruits.

“The great thing about the series is it feels like an ensemble, where each character has their own story they could tell. Whilst their lives do touch on the heroics that we’re used to with dogfights and bombs, there’s a whole wealth of other stories here about life in wartime that are more rarely heard.”

ATA Girl is available for pre-order now at £17 on download, and/or it will be available at £20 on download on its release in April.

The complete Big Finish Originals range is also available in a pre-order bundle of £120, as well as each series being available as individual downloads.

Keep checking the Big Finish website for more details on this and other upcoming Big Finish Originals.