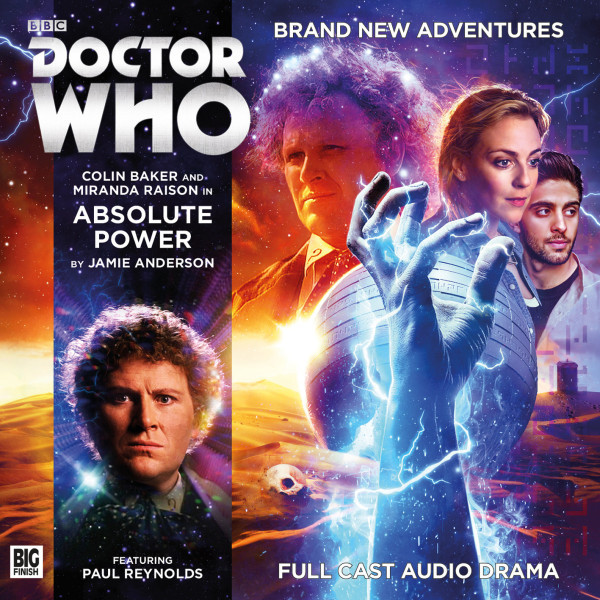 CD
US $20.37
Buy
Download
US $12.99
Buy
Subscribe Save money with a bundle Login to wishlist
10 Listeners
recommend this

Two thousand years ago, all civilisation on the planet Teymah was wiped out in an AELE – an Anomalous Extinction Level Event. Now, the galactic entrepreneur Lyam Yce hopes, at last, to learn the reason why the ancient Teymahrians went extinct – by funding a huge archaeological dig.

While the Doctor probes a strange sphere found by Yce's diggers, his companion, former Bletchley Park cryptographer Constance Clarke, agrees to help translate symbols written in the lost ancient language of the Teymahrians. And soon, they'll learn that ancient Teymah's secrets were best left buried deep beneath its shifting sands...

Wonderfully written and enacted … you can hear a real sense of joy and love for, and of, the subject matter and the tale that’s being told in every single second of the drama. Absolute Power is, from beginning to end, an absolute pleasure...

A strong entry in to the main range and a very different take on a Sixth Doctor story. It's amazing that after all these years Old Sixie is still being given new things to do, and new facets of his character are being drawn out. An absolutely powerful 9/10

Anderson opens up the scope of the piece as each episode goes on and what seems like quite a small scale tale becomes a discussion of revenge and betrayal. …The characterisation of the sixth Doctor and Constance is spot-on... The music and design work are very cinematic, as we’ve come to expect from Anderson’s work on the series… An engaging and very slickly produced piece. 8/10