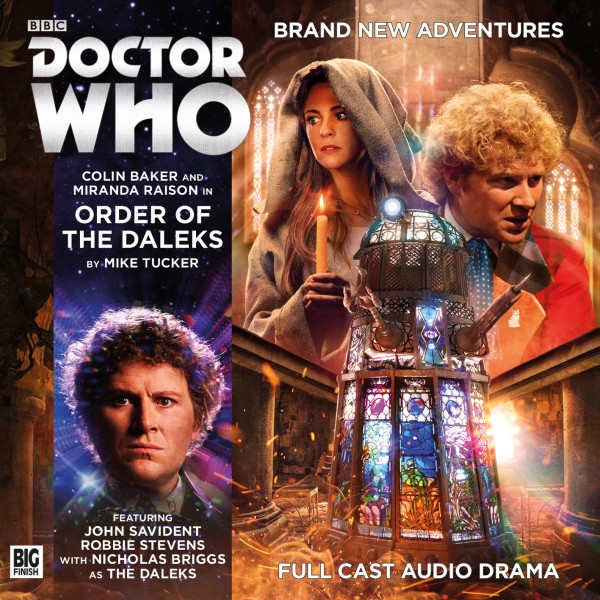 In the Galactic Census, idyllic Strellin is recorded as a Grade Three planet – its inhabitants possessing neither advanced technology, nor knowledge of other worlds. Accordingly, Strellin is protected: landings by off-worlders are strictly prohibited. Unless, of course, those off-worlders are officials of the Galactic Census itself, come to investigate the origin of a mysterious sub-space signal - a signal no native of Strellin should be able to send...

Breaking all local by-laws, the time-travelling Doctor and his companion L/Wren Mrs Constance Clarke (AWOL) have only just landed on Strellin, too. But they and the Census officials aren't the only off-worlders to have come here. Inside a nearby monastery, the monks of the reclusive Brotherhood of the Black Petal are guarding a strange and terrible secret. Something that might bring disaster not just to Strellin, but to every civilised world in the galaxy!

This first episode of Doctor Who: Order of the Daleks was available free with a code on the BBC's Doctor Who Facebook page in November 2016.

The CGI designer responsible for the Dalek on the cover of this release, Chris Thompson, comments on the work:

"I take great enjoyment from the distinct styles of different cultures and I always thought it would be great fun to reinterpret various iconic sci-fi designs in the style of other cultures and eras.

For this reason, getting to do a stain glass Dalek (or Dalek Stainly as he/she is affectionately called) was particularly exciting. The brief from Jamie Anderson (the Director) was that it was constructed by the indigenous monks of an alien civilisation after the previous casings where destroyed.

I went around local churches for reference and looked at things such as iron gates, stained glass windows and cloisters for the shapes, my first designs somewhat deviated from the classic silhouette with added details such as crowns, a dome that came down like a samurai helmet, large ball rollers on the base etc.

Eventually we reigned it in to something more classic in style with a few gothic elements such as the neck piece and the claw holding the glass eye. No sink plungers on this planet so the arm became a claw and the weapon became a retractable spear.

We decided to lose the hemispheres on the skirt in favour of a stain glass design, in my head it depicts the various moons over the planet set against the seasons. There is also a second eye between the arms representing the mutant inside. There had to be a certain glass to iron ratio to make it look like it could support its own weight.

All in all I am very pleased how the design turned out and honoured to have featured on Simon Holub’s wonderful cover."