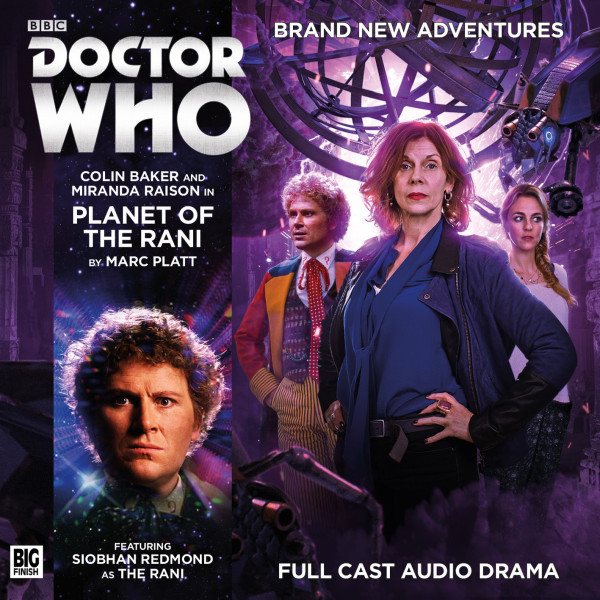 Miasimia Goria was a quiet planet, an ancient world of bucolic tranquillity… until the Rani arrived with ideas of her own.

She planned to create a race of new gods… gods that she could keep on her leash, but those plans went horribly wrong.

Now, she languishes in the high security of Teccaurora Penitentiary, consigned there by her arch enemy and old student colleague, the Doctor.

But the Rani, always resourceful, ever calculating, knows things about the Doctor’s past that he would rather forget. She wants revenge, even if it takes a hundred years… and then she has other unfinished business.

The ruins of Miasimia Goria await…

There I was, trying to pretend that this was what detectives do. Or archaeologists. They uncover a few scraps of evidence or pieces of broken mosaic, snatched from passing remarks in previous scripts, and try to piece them together to complete the missing picture.

The Rani – Prydon Academy with the Doctor – Miasimia Goria, suffering under the Rani’s rule.

Just because the Doctor has always suffered from itchy feet and never had the urge to settle on any particular world, it doesn’t mean that the Rani hasn’t always longed for a home of her own. A nice secluded planet with a ready supply of subjugated subjects for her scientific experiments.

She had been intent on increasing the mental capacity of the indigenous populace, but somewhere along the line it all went horribly wrong. No-one could sleep. People rebelled. The Rani’s detailed scientific work was meticulous, but her overall judgement was deeply unsound. She has a fine swagger to her – but it’s her overblown self-confidence that tends to undermine her schemes.

How she must hate the Doctor and his debonair capacity to swan through the greatest chaos, averting catastrophe with the merest sleight of hand. He’s always done that, ever since they were in the same year at Academy. That must be infuriating for her. Every time they meet, there seems to be so much bickering that one wonders just how close they once were. If anyone knows about any forgotten misdemeanours from the Doctor’s past, it must be the Rani – and she’d never miss a chance to rub salt into her rival’s old wounds.

So where are we now? After her re-emergence in The Rani Elite, the Doctor consigned her to prison – the best place, he has decided, for both her and the rest of the Universe. But in that hopelessly optimistic way of his, he didn’t take into account his enemy’s inestimable resourcefulness. You’d think he’d never learned his lesson after the Master was locked up on the Isle of Wight. Did he really expect the Rani to sit in her cell for eternity, reading back copies of New Scientist or Hello!? Surely a prison with rows of inmates trapped in rows of cells is far too much like an experimental laboratory for her to be able to resist? And she can be frighteningly persuasive.

Meanwhile, what’s been going on Miasimia Goria? What sort of strange planet is it? How have any survivors of the Rani’s poor, enslaved world fared? Will anyone have taken over her empty throne? Surely there will be a distinct lack of welcome if she does dare to return.

And what about Leading WREN Constance Clarke? Mrs Clarke has only just boarded the TARDIS, but how much has her tour of wartime duty at Bletchley Park prepared her for travelling with the notoriously unpredictable Doctor? Or for the trials of her first alien planet? I suspect, like the Rani’s plans themselves, it’s all going to be a bit of a shock.

Planet of the Rani is a masterclass in Doctor Who storytelling that teases, tantalises and leaves you desperate for more. Tim Cundle, DWM