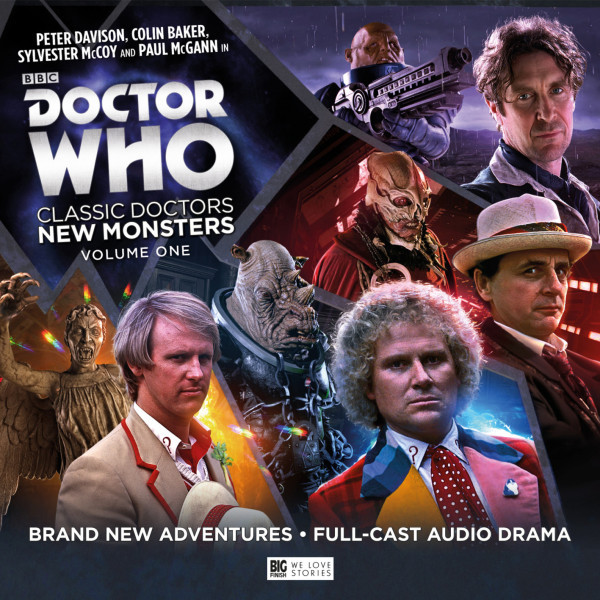 CD + Download
US $42.18
Buy
Download
US $36.15
Buy
Save money with a bundle Login to wishlist
66 Listeners
recommend this

Four brand new adventures, featuring monsters from the new series of Doctor Who!

2015: When sightseers Joel and Gabby Finch encounter a strange man in Edwardian cricketing garb in the Sistine Chapel, their honeymoon suddenly takes a terrifying turn.

1511: Michelangelo is commissioned to create some very special sculptures by a mysterious sect. But as he carves, angels seem to emerge fully-formed from the rock. Almost as if they are alive…

From Michelangelo’s workshop to the catacombs of Rome, the Fifth Doctor must keep his wits about him and his eyes wide open as he confronts the Weeping Angels.

1.2 Judoon in Chains by Simon Barnard and Paul Morris

The Sixth Doctor is no stranger to courtroom drama, but faces a very different challenge when he prepares to defend a most unusual Judoon.

After an environmental clearance mission goes wrong, Captain Kybo of the Nineteenth Judoon Interplantary Force is stranded in Victorian England, bound in chains, an exhibit in a circus show. But he has allies: Eliza Jenkins – known to audiences as ‘Thomasina Thumb’ – and the larger-than-life ‘clown’ in the colourful coat.

Uncovering a trail of injustice and corruption, the Doctor and Kybo soon find themselves on trial for their lives...

1.3 Harvest of the Sycorax by James Goss

In the far future, humanity has a remedy for everything. Whatever the problem, Pharma Corps has the answer and a designer disease tailored to every human’s blood-type. Zanzibar Hashtag has no need to be sad, scared, stressed, or depressed ever again.

That is, until vicious aliens arrive on her space station intent on opening its Vault. What will it mean for the human race if the Sycorax take control of what’s inside?

And when the Seventh Doctor arrives on the scene, can he convince Zanzibar to care about her life long enough to help him?

1.4 The Sontaran Ordeal by Andrew Smith

An instant of the Time War brings centuries of conflict to the planet Drakkis, and the Eighth Doctor is there to witness the terrible results.

A Sontaran fleet, desperate to join the epic conflict, follows in its wake to take advantage of the fallout. But when Commander Jask is beamed down to the ravaged surface, there is more to his arrival than first appears.

Soon, an unlikely champion joins forces with the Time Lord to fight for the future of her world, and together they must face the Sontaran Ordeal…

Cattle! Jump aboard this clever story [property].
Welcome! This choice release is funny and dark and strong.
Therefore surrender to us. Think! Laugh! Cherish! [Own]
We bring the wasteland. We bring the darkness. We bring death.
The strong girl? The funny Doctor? Their coward friends [yellow people]? Your weak cattle species?
We will own you all now!
Sycorax Strong! Sycorax Mighty! Sycorax Rock!

Big Finish have done a masterful job of weaving the old with the new, so while the introduction of new monsters adds a certain freshness to these stories, they still feel like classic Who.

Shop all audiobooks
Next release in this range: Doctor Who: Classic Doctors New Monsters 2