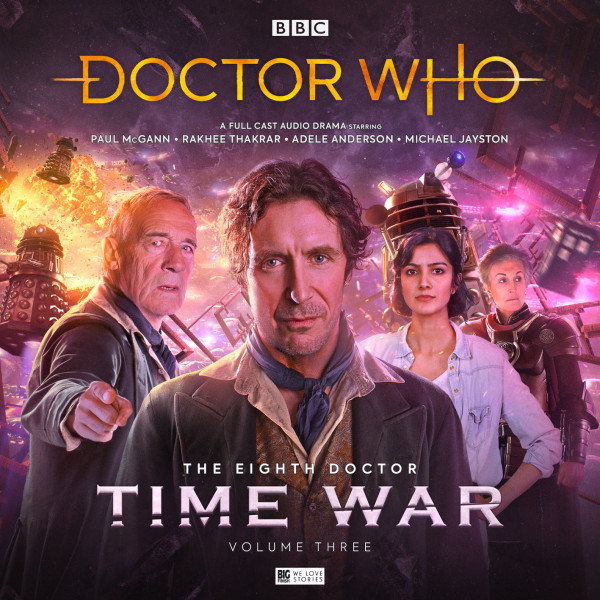 CD + Download
US $27.71
Buy
Download
US $24.10
Buy
Save money with a bundle Login to wishlist
62 Listeners
recommend this

The Time War rages through space and time - two powerful enemies in a fight to the death. The Doctor keeps to the fringes of the conflict, helping where he can. He is not a warrior. Not yet. But this war takes no prisoners, and friends and enemies are drawing the Doctor ever closer to his destiny…

3.1 State of Bliss by Matt Fitton
Bliss has lost her home, her family, and her friends - an orphan of the Time War. The Doctor attempts to find out where things went wrong. Across a multiverse of possibilities, Bliss discovers the many paths her life could have taken - but do they always lead to the Time War?

And if Bliss can save her past, will she destroy her future - and the Doctor's?

3.2 The Famished Lands by Lisa McMullin
Trying to make a difference far from the front lines, the Doctor and Bliss arrive in the Vale of Iptheus, where the Time War is starving populations out of existence.

The inhabitants have taken matters into their own hands - but are now on course for something worse. Bliss discovers exactly how the robot Enablers are helping the people, while the Doctor uncovers a terrifying secret...

3.3 Fugitive in Time by Roland Moore
Returning a favour for Major Tamasan, the Doctor and Bliss accompany her to extract a dangerous fugitive from an isolated medieval world.

Shonnath is the last of her kind and has her reasons to be wary of Time Lords. What’s more, the Daleks are also on her trail - and when the Doctor and friends arrive, the enemy is already closer than they think.

3.4 The War Valeyard by John Dorney
The Valeyard has returned to the universe amid the Time War - and the Time Lords see his potential to end the conflict for good.

When the Doctor discovers that his twisted future self has been conscripted, he sets out with Bliss to find him, braving a planet ravaged by Daleks.

But in a world where he can finally be a hero, will the Valeyard want to leave?