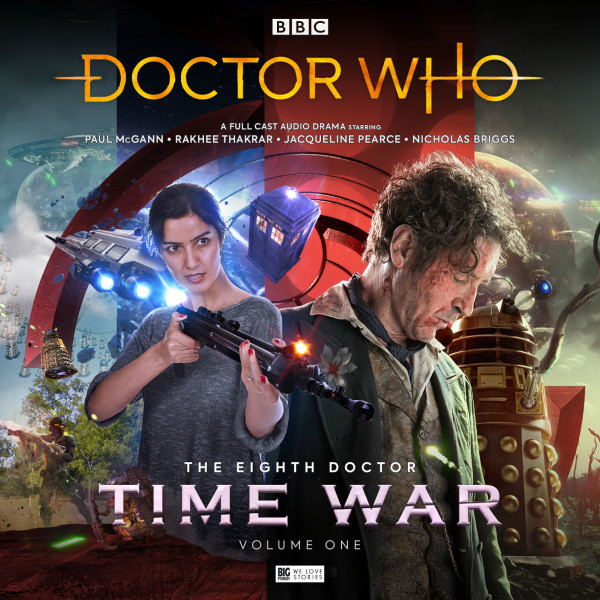 CD + Download
US $49.51
Buy
Download
US $43.32
Buy
Save money with a bundle Login to wishlist
73 Listeners
recommend this

A terrible war is being waged through space and time, as two powerful enemies rip the cosmos apart in a final struggle to the death.

The Doctor stands apart from this conflict: he is not a warrior, but a healer.

But the Time War is snapping at his heels, and soon he will have no choice but to turn and face its horrors...

1.1 The Starship of Theseus by John Dorney
The Doctor and his companion, Sheena, land the TARDIS on the glamorous luxury space-liner Theseus just as it’s about to leave the Jupiter space-port. An opportunity for a holiday presents itself – and it’s one they’re very glad to take.

But when a disturbance catches their attention, they realise sinister events are taking place on board. Passengers are vanishing on every trip. And unless they’re careful they may be next.

Can the Doctor and Emma solve the mystery? Or is there something else they should be worrying about?

1.2 Echoes of War by Matt Fitton
Colliding with the full force of the Time War, the Doctor crash-lands on a jungle world with a ragtag band of refugees.

To stay alive, they must cross a landscape where time itself is corrupted. A forest that cycles through growth and decay, where sounds of battle are never far away, and where strange creatures lurk all around.

Luckily, the Doctor has friends: not only plucky scientist Bliss but another, much more unlikely ally. Its name is ‘Dal’...

1.3 The Conscript by Matt Fitton

Cardinal Ollistra has a new tactic to persuade the Doctor to join his people’s fight. With his friends locked away, he has been conscripted alongside fellow Gallifreyans to train for the front lines of battle.

Commandant Harlan has a reputation - his camp’s regime is harsh. He believes the Time Lords must adapt to win this war, but the Doctor is not easily intimidated.

Can there be any place for dissent when the Time War looms so close?

1.4 One Life by John Dorney
As the full force of the Time War crashes down around the Doctor and his friends, a desperate battle for survival ensues.

But not everyone is playing the same game. Ollistra is after a weapon that could end the war in a stroke and she’ll sacrifice anyone or anything to take it back to Gallifrey. Even the Doctor.

Surrounded by Daleks, and on a tortured planet, only one man can save the day. But he doesn’t want to fight.

This feels exactly like the Time War series should. It separates itself from the Doom Coalition or any of the previous 8th stories and sets, and gives you a distinct style whilst honouring who the 8th Doctor has to be until that fateful night. 10/10

This set is the Doctor many listeners have wanted. Though the circumstances may be grim, it would be churlish not to enjoy it.

Since its announcement back in 2015, the Eighth Doctor’s Time War series has been among Big Finish’s most anticipated releases. Series one certainly doesn’t disappoint. The writing team of Dorney and Fitton lay out a series that takes Doctor Who far outside its comfort zone. With strong performances all around, The Eighth Doctor: The Time War is an essential piece of listening for any Doctor Who fan and the beginning of something that sounds to be truly unmissable. 10/10

With incredible performances from all involved, strong direction, and evocative and powerful sound design, the shifts in tone and scale are handled with ease and create a thoroughly rewarding experience from beginning to end.

It’s the start of a whole new era for the Eighth Doctor and this box set is certainly a brilliant way to start it! An exceptional cast, praiseworthy original story-telling and outstanding cinematic music score.