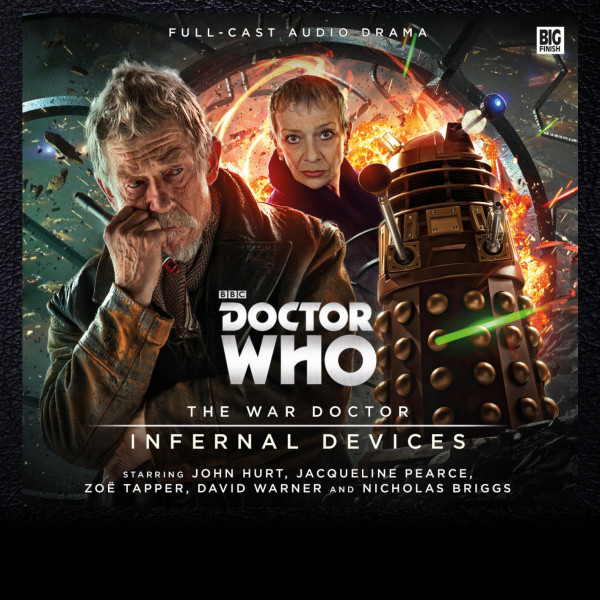 Download
US $25.00
Buy
Save money with a bundle Login to wishlist
50 Listeners
recommend this

In the midst of the Time War, Daleks and Time Lords bring to bear all the weapons they can find, unleashing untold devastation. But if just one of these infernal devices can provide an advantage - however small - that could mean victory.

While the Daleks experiment with new ways of waging war, Cardinal Ollistra seeks out arcane and mysterious armaments of her own.  And she will have the assistance of Gallifrey's greatest warrior - regardless of whether he is willing to help.

As both sides think the unthinkable, the consequences for the universe could be catastrophic. But the Time War must be won, at any cost...

2.1 Legion of the Lost by John Dorney

In a time of war, every means of victory must be explored. In the Time War, the unthinkable must be thought, and neither side can afford to be squeamish about their methods.

When the destruction of an obscene weapon leads to the Time Lord once known as the Doctor uncovering a secret Gallifreyan initiative, he cannot believe what is being considered.

Should victory be sought at any cost? Or are there worse possibilities than losing to the Daleks..?

2.2 A Thing of Guile by Phil Mulryne

The Daleks are developing a secret weapon on Asteroid Theta 12. It is imperative that their plans are uncovered.

Cardinal Ollistra has her hands full studying the range of ancient and mysterious armaments the universe has to offer, but she makes it a personal mission to investigate the Dalek project.

On this dangerous assignment, there is one particular Time Lord she wants at her side - and he will be accompanying her whether he wants to or not.

2.3 The Neverwhen by Matt Fitton

On an isolated world ravaged by battle, time itself has become a weapon, laying waste to all who live and die there. Arms and technology are in a state of flux - and it seems that everlasting war is their only option.

The arrival of one battered Type Forty TARDIS inside this nightmare offers hope to the combatants trapped within.

But when he discovers the truth, the horrors of the Neverwhen will shock even the War Doctor...

Its scope and grandiose scale transform Infernal Devices into the kind of monumental and gargantuan space opera that this apocalyptic conflict was always supposed to be. Welcome to the Time War.