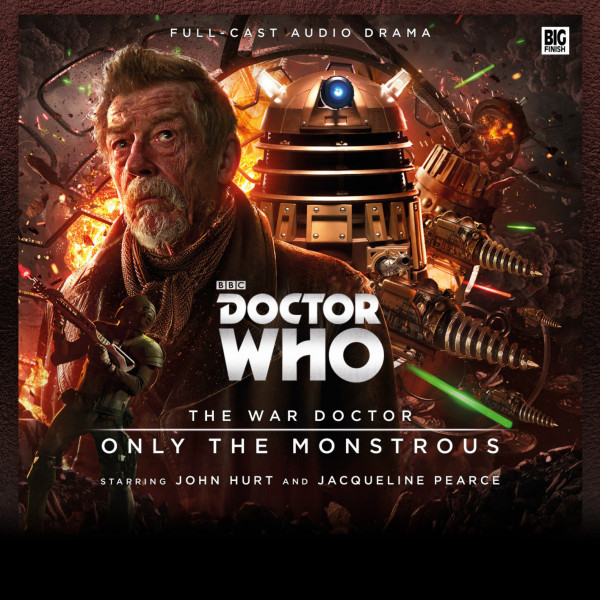 1. Doctor Who: The War Doctor: Only the Monstrous

Download
US $24.99
Buy
Save money with a bundle Login to wishlist
77 Listeners
recommend this

With the Time War raging between the Time Lords and the Daleks, enveloping all of time and space in the conflict, the Doctor knew he could stand on the sidelines no more. To that end, he renounced his name and pledged to do what was necessary to bring about peace.

But the fire of the war so vast and so fierce is not easily extinguished. Its strategies, its betrayals, its sheer devastation will severely test the Doctor who knows he can be the Doctor no more.

And as the battlefields seem to stretch on for eternity, he will now face new and terrifying, unthinkable dilemmas...

For, in this unrelenting Time War, no one is left untainted. And, perhaps, no one except the truly monstrous can survive its ferocity.

With the high-ranking Time Lord Seratrix behind enemy lines, the War Doctor finds himself assigned to a rescue mission. But any room for manoeuvre is severely restricted by an area of space known as the Null Zone.

Times have changed on Keska, and a countdown to destruction is beginning.

But who are the Taalyens and what is their part in the great and terrifying Dalek plan?

1.3 The Heart of the Battle

Trapped in a citadel swarming with Daleks, the Time Lord rescue force must find a way to overcome insurmountable odds. With the Daleks apparently planning to rule the Null Zone, perhaps their thirst for universal conquest and victory has been quenched…

The War Doctor doesn’t believe so - but how can he prove it without destroying any chance of peace?

As the countdown to the destruction of Keska proceeds, a deadly choice must be made... A choice that will define this Doctor, and perhaps forever cast him in the role of 'monster'.

**THIS TITLE IS NOW OUT OF PRINT ON CD*

An intelligent, captivating and incredibly enjoyable production... This excellent release is the story of how war forever changed the Doctor.

Shop all audiobooks
Next release in this range: Doctor Who: The War Doctor: The Innocent