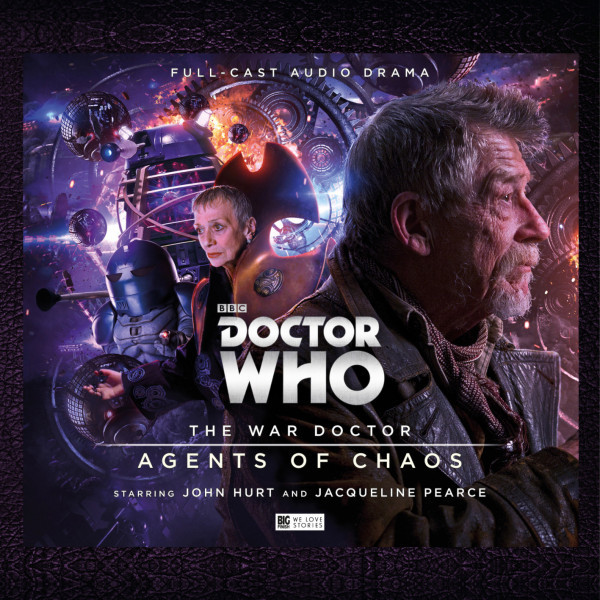 3. Doctor Who: The War Doctor: Agents of Chaos

Download
US $25.00
Buy
Save money with a bundle Login to wishlist
40 Listeners
recommend this

The Time War between Daleks and Time Lords rages across the history of the cosmos. Nowhere is safe. Worlds are ravaged by battles beyond their understanding, but certain other races hunger to fight in the ultimate conflict.

When Earth comes under threat, the War Doctor is drawn into Ollistra’s schemes once again. But the wily Time Lord Cardinal has not foreseen every move. The Dalek Time Strategist has its own game-pieces in play, and when volatile forces with their own agenda join the fray, no-one can predict how the war might turn...

3.1 The Shadow Vortex by David Llewellyn

Cardinal Ollistra exploits the War Doctor’s affection for Earth to send him to East Berlin, 1961, on the trail of a Dalek agent. Lara Zannis has breached the planet’s quantum shield on a very special mission for the Dalek Time Strategist.

Caught between MI6 and the KGB, the War Doctor must first escape the Stasi before he can hope to stop Lara. Cold War scientists are about to make a breakthrough - the Daleks want control of the Shadow Vortex, and Agent Zannis can provide it.

3.2 The Eternity Cage by Andrew Smith

Sontarans are the ultimate warriors - so they believe - and the Time War the ultimate conflict. Denied that glory by Skaro and Gallifrey alike, General Fesk of the Eighth Sontaran Battle Fleet employs a dangerous strategy to draw both sides to the planet Rovidia and prove his forces worthy...

Meanwhile, the War Doctor leads a rescue mission, aided by Rovidian street-urchin Kalan. Neither Daleks nor Time Lords expect the Sontarans to be so fearsome a foe until they uncover the secret of the Eternity Cage.

3.3 Eye of Harmony by Ken Bentley

Trapped inside a critically-damaged Battle-TARDIS, hopelessly adrift in the Time Vortex, the War Doctor and his allies have a final desperate fight on their hands...