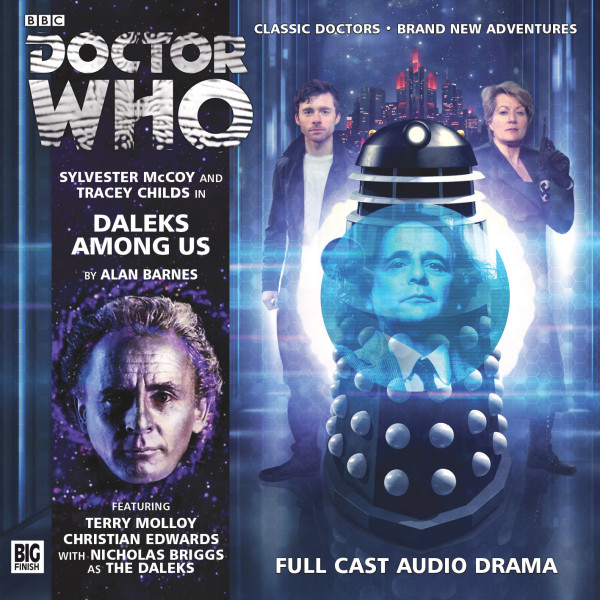 REMINDER: TO ALL CITIZENS

Twenty years ago, the Daleks did not invade Azimuth. There was no war. There were no death camps. A man named ‘the Doctor’ did not help liberate Azimuth.

UPDATE: TO ALL CITIZENS

A strange blue box has not appeared in Monument Plaza. Off-worlders named ‘the Doctor’, ‘Elizabeth Klein’ and ‘Will Arrowsmith’ are not at large in the city. For your own safety, should you not see any of the above, report at once to the Department of Re-education, Azimuth Central.

Sylv in the Universe

Sylvester Mccoy chats to Paul Spragg about reuniting with Klein, sizeism and what it takes to be a real Doctor

Hello Sylvester. So, you’re back with Klein (Tracey Childs) in the monthly range at the moment…

Klein! Eine Kleine Nachtmusik! You know, they dug Mozart up recently and he was still decomposing.

Great! Tracey’s smashing and a marvellous actress and great fun. The Klein character is interesting because I don’t think the Doctor’s ever quite sure [of her], and that’s good.

Most recently prior to this you’ve been back with Sophie Aldred as Ace. How do she and Tracey compare?

Well, Tracey’s taller and Sophie’s smaller. In radio terms, they’re all whatever size the listener imagines, really. Although they keep talking about my smallness in the scripts. Wait ’til I see those authors! Or that editor… [laughs] But it’s great. All grist to the mill. A variety of beautiful women to work with. What a wonderful job!

For this trilogy you’ve also got an additional assistant: Christian Edwards as Will Arrowsmith.

He’s great fun; he’s very light, very enthusiastic. It’s a great character he’s created, and who has been written for him.

It certainly gives the set-up a different dynamic.

He is a bit of a scientist and an enthusiast, so he gallops off like a little puppy, chasing some scientific theory – and sometimes gets it right!

The trilogy ends next month with Daleks Among Us.

It’s twenty-five years since I did a television Dalek story. I didn’t really think I could lay claim to being a real Doctor until I’d battled and defeated the Daleks. Every now and again you’ve got to test your mettle against the Daleks’ metal.

It’s been a while since you’ve done an audio Dalek story, and the first time you’ve done any story with Terry Molloy as Davros since Remembrance of the Daleks.

I’ve worked with Terry anyway. I’ve known Terry since 1976 because I did a series of three plays in Coventry and Terry was in them with me. That’s where I met him. A young man as he was then, as I was. That was the year my first son was born. It’s a joy working with Terry. He’s so professional. He’s Mr Radio, isn’t he? He knows it inside out. And in front, all the way up and down – and in stereo! Although I keep getting disappointed in my Doctor because he keeps seeming to defeat the Daleks but never does, quite… I’m sure the audience are pleased really, secretly, because they want them to come back.

The last trilogy was quite focused on the companions; do you mind the odd Doctor-lite story?

It’s just nice to do it, really. Sometimes it can be a bit overpowering, the amount of stuff we have to do. So I quite enjoy coasting through for a little while. Takes the pressure off a little. Because it does get tiring saving the universe regularly. One of these days I feel like saying, ‘ Oh universe, look after yourself’.

Which is sort of what the Seventh Doctor is trying to do here.

These stories are all about him trying to tidy up things because he knows his time is coming to an end; it’s happening just before the Doctor Who film where Sylvester McCoy hands over to Paul McGann so it’s quite interesting with him tying up the loose ends so that the next Doctor might not have it so bad.