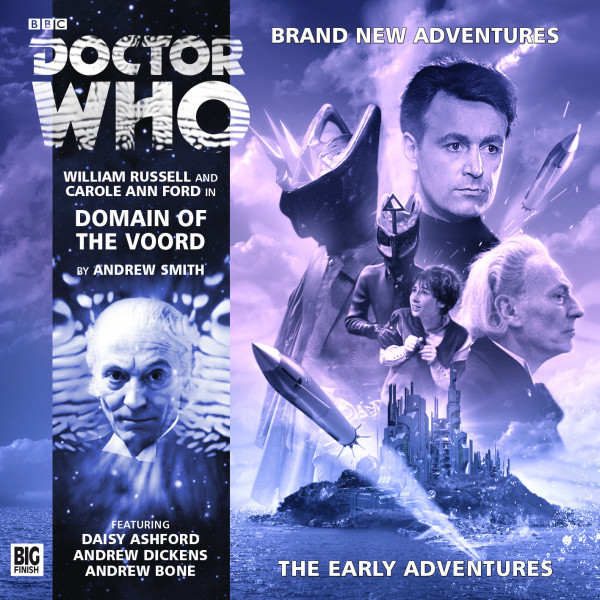 Download
US $13.52
Buy
Save money with a bundle Login to wishlist
34 Listeners
recommend this

The Doctor, Susan, Ian and Barbara land on the planet Hydra, where Admiral Jonas Kaan leads a vast flotilla of ships trying to elude the vicious race that has invaded and occupied their world. But his ships are being picked off one by one, vessels and crews dragged underwater by an unseen foe.

The time travellers find themselves pitched into battle against the Voord, the ruthless enemy they last encountered on the planet Marinus. As they take the fight to the very heart of the territory now controlled by the Voord the stakes get higher. First they lose the TARDIS... then they lose that which they hold most dear. And that's only the start of their troubles.

In the capital, Predora City, they will learn the truth of what it means to be a Voord. And that truth is horrifying.

Episode titles:
1. The Floating City
2. Return to Terror
3. Behind The Mask
4. Fightback

The first season of Early Adventures begins with Domain of the Voord, written by Andrew Smith. David said: “They are a monster that have never been back since The Keys of Marinus, yet they have a huge amount of potential for new stories. I’d rather like to bring them back again actually – Andrew has filled in some fascinating backstory, and Terry Nation created a fantastic foe.”

Andrew was delighted to work with the Voord, whose background and genesis were largely left blank by Nation. “It was great fun to do – the Voord look amazing, although there are a number of questions left unanswered, and some contradictions, about them in their TV story. For instance, what does a Voord look like? They have a very striking look, and you want to keep that, but one possibility in Keys of Marinus is that they are wearing protective suits in order to cross the acid sea.  Of course, the look is great, and I wanted to keep that, but that meant coming up with a rationale for why they would look as they do having an acid sea to cross.

“So, together with my first pitches, I wrote up a few paragraphs on where I wanted to go with the Voord, whatever story idea David favoured. Listeners will learn what it means to be Voord...”

He also had the challenge of working on the Early Adventures, in a new format of play – not quite full cast, and not a dramatised reading either – with ‘live’ drama and narration both playing a part in telling the story. Andrew explained: “John Dorney, script editor for this series, came up with the helpful pointer that these should sound like the BBC Audio soundtracks of the lost stories from the Sixties, where narration tends to set up a scene but is otherwise used fairly sparingly.

“We wanted it to have a feel to it as if it had been performed in the 1960s, so the director Ken Bentley had the actors speaking in RP (Received Pronunciation), rather than using regional accents as we would if it had been written for now.  It really feels like a bit of sixties Doctor Who. For instance, you get the Doctor arguing with his companions, and Ian, in particular, getting annoyed with him. It’s good fun and I hope it takes listeners right back to those very earliest days of the show.”

Shop all audiobooks
Next release in this range: Doctor Who: The Doctor's Tale