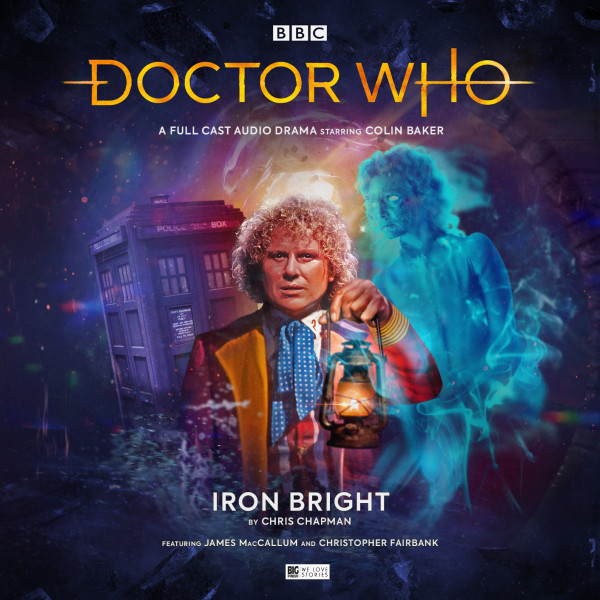 It's London, 1828, and the father-and-son team of Marc and Isambard Kingdom Brunel are masterminding a dangerous project - the digging of the Thames Tunnel. There's just one problem...

The Brunels' tunnel is haunted. Every night, a spectral blue lady walks the excavation.

Now, the 22-year-old Isambard, eager to step out of his famous father's shadow, finds himself dealing with not only the supposed supernatural, but a second unexpected guest - a colourful trespasser who calls himself 'The Doctor'.

Isambard would like to know a great deal more about this strange man and his mysterious blue box...

This is my third story for Big Finish now after The Memory Bank and The Middle - and as both of those were outer-space, "IN A WORLD..." kind of stories, I thought I might take a shot at historical Who this time round. Something a bit more earthbound - or as it turned out, subterranean...

I'd recently moved to Bristol, and you can't move round here for references to that engineer extraordinaire, Isambard Kingdom Brunel. As well as his glorious Suspension Bridge, he's got museums, streets, even sandwich shops named after him! So I thought he might be a fascinating historical figure to throw into Doctor Who - taking my lead from the Russell T Davies era 'celebrity historicals'.

I had so much fun with the research for this story. Firstly, I realised there was a perfect moment in Brunel's life for him to encounter the Doctor. In 1828, as a 22-year-old, Isambard was digging the Thames Tunnel (the first excavation beneath a major river) alongside his famous father, Marc Brunel - with some tension present between the two. The project was way over budget and the men of their workforce were dying in cave-ins - one particularly fierce flood almost killed Isambard himself. After that, he never worked with his father again. And that was when his career as a world-changing engineer really took off.

So what if the Doctor was there in the Tunnel when things were at their worst? What if that meeting changed Isambard's life? And what if Big Finish got to tell that story?

And then it was just fun to meld the sci-fi and horror of Doctor Who with real life details. Brunel's trusted aide on site was indeed Richard Beamish, who was indeed a former member of the Coldstream Guards, who did indeed perform as a band at the massive banquet that Marc threw one night in the tunnel itself! That was my favourite thing to do - to marry up reality with unreality.

And there was room for some nuggets of Doctor Who history too: the Sixth Doctor reveals in The Two Doctors that he has a business card belonging to one of the Brunels - so I couldn't pass up the chance to work that in too. There's always room for a bit of continuity geekery!

This is an historical Doctor Who tale done right. You get a real life event that is given justice by the script in its telling with a Doctor Who twist weaved into it seamlessly. 8/10

Iron Bright is a great mixture of genres, combining ghost story with historical and large scale science-fiction. Amongst all of that, it also explores themes such as colonialism and pollution. So it justifies its length of two-hours beautifully. Another great listen for the Sixth Doctor.

Forging its own path with a pseudo-historical tale that’s sure to become a classic, ‘Iron Bright’ proves that author Chris Chapman deserves his place in the Who writer pantheon.