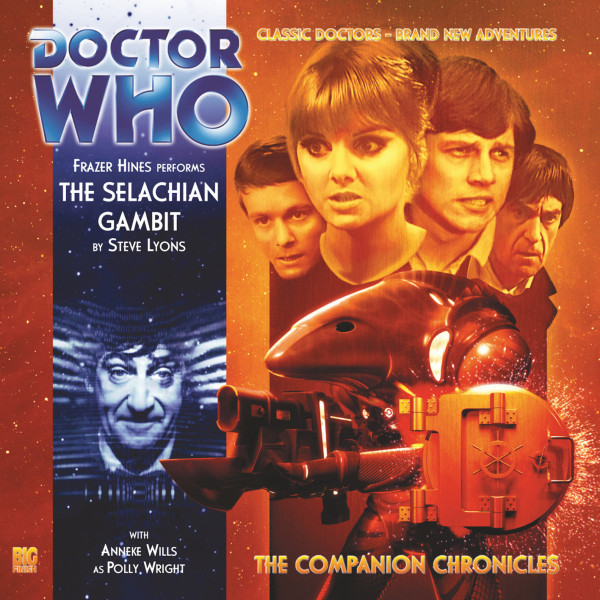 6.8. Doctor Who: The Companion Chronicles: The Selachian Gambit

Download
US $9.89
Buy
Save money with a bundle Login to wishlist
18 Listeners
recommend this

The Doctor doesn’t normally need money, but when the TARDIS is immobilised and a fine has to be paid, a loan from a bank in the sky seems the solution to his problem.

But then the Selachians arrive, and the Doctor and his companions find themselves as hostages in the middle of a heist.

Death seems an absolute certainty. But the Doctor, Jamie, Polly and Ben have outwitted death before…

This story takes place between the BBC television stories The Macra Terror and The Faceless Ones.

David Richardson on The Selachian Gambit

"I'm very fond of these Companion Chronicles that feature two companions. We couldn't do them all the time, just because of the budget, but I can wangle them every now and again and I think The Selachian Gambit shows a companion pairing of the best kind.

"I'd enjoyed the Selachians in The Architects of History, and thought they'd work well in a narrated story. And I figured with Frazer playing Jamie, doing his Doctor impersonation and playing the Selachians too, we were on our way to a full cast played by him. As I jokingly said to him afterwards, we got our money's worth!

"Both Frazer and Anneke are terrific in this, and I think Alistair Lock did some amazing sound design and music. It sounds just like a soundtrack from Doctor Who in the mid-1960s. I'm actually currently listening to Patrick Troughton's first season on audio, and I think this would fit in seamlessly."