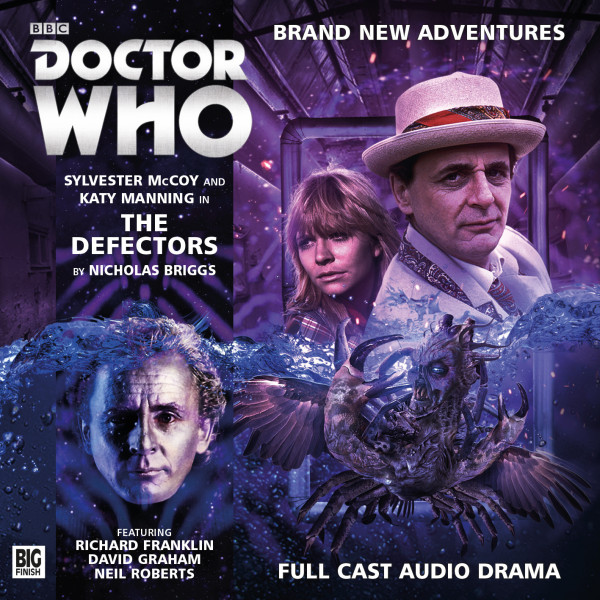 198. Doctor Who: The Defectors

CD
US $20.37
Buy
Download
US $12.99
Buy
Subscribe Save money with a bundle Login to wishlist
23 Listeners
recommend this

Jo Grant is shocked to find most of her colleagues are missing. Then she discovers that the Doctor has inexplicably changed.

But there’s no time to worry about it, as she and her misplaced Time Lord friend are whisked to the mysterious Delphin Isle on a matter of national security. There, they encounter a disturbingly odd form of local hospitality and learn of a highly classified incident that took place during the Cold War.

Why exactly have they been brought here? And what is the truth concerning the bodies in the harbour and the vast project being undertaken beneath a cloak of secrecy?

I’m about to take advantage of the fact that these notes are no longer bound by the word restrictions of a CD booklet. Be warned!

My dear friend Barnaby Edwards (who, it won’t have escaped your notice, I cast in this production) has a little joke he makes about my writing. It’s based on something about my past.

I had a more or less happy childhood. I was never an outstanding student at school, but I was relatively happy there. I think, like many children of my generation, I would have preferred not to go to school. I mean to say, there was much more fun to be had at home with tape recorders and Daleks!

For those youngsters reading this, school in the 1960/70s was a disciplined-obsessed affair. It was all about standing in lines, putting your hands on your head, chanting multiplication tables and being quiet and not scribbling in the back of your exercise book. It was often about blackboard rubbers being thrown at you by impatient teachers and, scarily frequently, it was about teachers (mostly male ones) having ‘special’ kinds of torture they would inflict on hapless pupils, often to the jeering delight of the rest of the downtrodden, fearful children, who would try to court favour with their terrifying adult supervisor by demonstrating approval of the savage punishment meted out. One such punishment administered by an openly racist Religious Education teacher (who used to issue a now, rightly, unmentionable racist slur to anyone who had displeased him) was to stand on your toes, crushing the polished, bulbous tips of your 1970s shoes, and grab your shoulders with pincer-like fingers, inflicting maximum pain and humiliation as he breathed heavily over your long, greasy 1970s haircut. Quite terrifying to recall.

Anyway, it was against this background that the prospect of bullying from fellow pupils hardly ever raised its ugly head in my life. But there was one exception.

For one year of my childhood, 1973 (or the Planet of the Daleks Year, as I know it, naturally), I lived on the Isle of Wight. It’s a small, vaguely diamond-shaped piece of land off the central, southern coast of England. It’s only around 150 square miles in size and is connected to the mainland by ridiculously over-priced car ferry services which exploit the fact that no one has yet had the sense to build a bridge over the very narrow piece of water that separates it from the mainland.

But this separation has engendered in the people of the island a strong sense of individuality, and as with many places that rely almost entirely on tourism for their local economy, there’s a conflicted sense of turmoil in the islanders’ feelings about ‘outsiders’. They welcome and cater generously for tourists who enjoy their beautiful and slightly-warmer-than-the-mainland sub(very-sub)-tropical paradise, but they would really rather said ‘mainlanders’ didn’t come and live there.

So, when I went to West Wight Middle School (an institution recently closed down because of falling educational standards, I was told by a local) back in 1973, on my first day, I found myself in the playground, surrounded by what felt like the whole school, chanting… I don’t remember what. It wasn’t pleasant and it was something about me being from the mainland. They circled me, sneering and jeering. I was completely confused — which is probably why I don’t remember what they were saying — and looked to the teachers patrolling the perimeter for help. Eerily, they simply turned their backs and let this odd ‘initiation ceremony’ continue. It was soon over, with no violence involved. But the strange hostility of that event persisted in my mind throughout my year attending that school.

Whether that distorted my perception of what followed or not, it’s difficult to tell. I was, after all, round about only 10 or 11 years old at the time. But, from my recollection, the rest of 1973 at school on the Isle of Wight consisted of my former best friend siding with the bullies, teachers blatantly marking me down for reasons I couldn’t fathom (I was actually put in such a remedial class for English lessons — formerly, and later, my best subject — that there were children from the year below attending, and the class was taken by the music teacher, whose relationship with grammar and spelling was, to say the least, somewhat casual) and a couple of instances of physical bullying from individual pupils. One, hilariously, consisted of anonymous urinating in my parka coat pocket (which I only discovered once I was on my way home on the school bus — parka coats are about 30% waterproof!). The other was a ridiculous affair when a boy named Tim dragged me into the cloakroom to give me a good beating. I was scared and useless as he pushed me around until he inadvertently smashed the face of my beloved watch on a coat peg. I was so outraged that he’d broken an expensive present I knew my parents had saved up for, that I lost all my fear, grabbed him by the shoulders and marched him to the head mistress’s office. ‘This boy is bullying me!’ I announced. Unsurprisingly, since by now poor Tim looked terrified, this pronouncement by me seemed rather unlikely and was brushed aside by our eccentric headmistress… a strange woman with William Hartnell-length hair, who prowled around the school, mysteriously, wearing a long black cloak.

This headmistress assured my mother that the individual responsible for the urine-in-the-parka-pocket incident would be found. To this day, we have heard nothing. Which reminds me, I must write to my MP about it.

So, why am I telling you about this? Well, the eagle-eyed psychiatrists among you will already by now be nodding, understandingly, perhaps slightly pityingly… if you’ve heard, read or seen any of my other work or, indeed, The Defectors.

‘You keep blowing up the Isle of Wight,’ laughs Barnaby Edwards.

Of course, I don’t actually do that. That would be a terrible crime against a sub(very-sub)-tropical paradise which I still love visiting. Although I was delighted to be the director, sound designer and composer for a lovely BBC Radio 4 comedy sci-fi series entitled Nebulous (starring Mark Gatiss and written by Graham Duff), in which the biggest shame for the titular character was that he had accidentally blown-up the Isle of Wight when he had attempted (for reasons best known to himself) to shift it three inches to the left.

But it is true that some appalling, and probably largely unjustified angst inside me does appear to compel me to act out… well, shall we say rather uncharitable acts towards islands in general in my fictional works? I had Autons invade and massacre the population of an island in a video I wrote and directed called Auton 2 (aka Auton: Sentinel); in the audio series Cyberman, the Isle of Wight was a penal colony; for a short story The Iron Circle, I had a vast magnetic force on the Isle of Wight draw all metal objects to it, with catastrophic effects (my original draft actually had the William Hartnell-haired headmistress meet a terrible fate when she got in the way of the school kitchen’s cutlery as every single piece of it flew straight at her!), and in The Defectors, the fictional Delphin Isle is… Well, you’ll hear all about that in the story.

So there you are. They say, ‘Write about what you know’. Mind you, they don’t say, ‘Do nasty things to islands because you had a bit of a bumpy year at school in 1973’, do they?

I really should get over myself. But nasty things happening on islands is just one of those hard-wired ideas in my mind. It seeps out without my noticing, and it’s usually poor Barnaby Edwards who has to point it out to me, ‘You’ve blown-up the Isle of Wight again!’ As he did on this occasion. And we laughed out loud, for quite some time.

Of course, in the interests of fairness, I would point out that the racist RE teacher incidents happened on the mainland.

It’s also interesting to note that I was recently commissioned to write a Big Finish Doctor Who story that featured an island where some kind of alien incursion was happening. I changed the setting. There’s hope for me yet!

...it possesses a wonderful nostalgic quality, aided no doubt by the incredible chemistry between, and performances from Sylvester McCoy and Katy Manning... It's absolutely marvellous. In fact, it’s marvellous with an extra dollop of brilliant on top. More please!

...well-handled concepts and twists alongside strong performances... an entertaining adventure... most effective in the way it blends the action and military intrigue of the Pertwee era with the darker, more ambiguous edge of McCoy's Doctor.