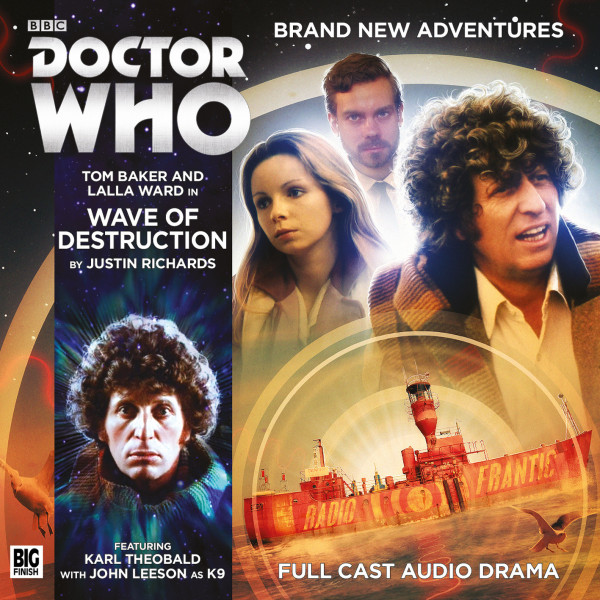 5.1. Doctor Who: Wave of Destruction

Download
US $8.99
Buy
Save money with a bundle Login to wishlist
13 Listeners
recommend this

A modulated frequency wave cancellation signal isn’t something that the Doctor and Romana expect to detect in 1960s London. But then they don’t expect to find Professor Lanchester, the man who invented it, lying unconscious. Or MI5 investigating.

With the help of MI5 Agent Miller, Lanchester’s daughter Jill, and his nephew a pirate radio DJ called Mark, the Doctor, Romana and K-9 investigate. They soon discover that there is more at risk than they imagined, and an alien invasion is about to begin.

Can the Doctor identify and defeat the aliens in time? Will Romana manage to find a recombinant transducer before it’s too late? And how will K-9 cope with his new job?

Wave of Destruction succeeds with flying colours, offering laughs, thrills and in-jokes in equal succession. Justin Richards’ script sparkles throughout, and the cast is on top form, particularly Baker and Ward, who are once again at the height of their power.

Highly reminiscent of the Douglas Adams era of the show... a humorous, and often laugh out loud funny, uplifting “tribute” to the sixties... Tom Baker and Lalla Ward are, as you’d expect, superb, falling into character with consummate ease... It’s a groovy tale that’s got the lot, adventure, excitement, monstrous moustache twirling villains, a fast, ferociously paced, involving plot...

A fine start to the season... great fun... Great to hear Tom and Lalla in brand new material.