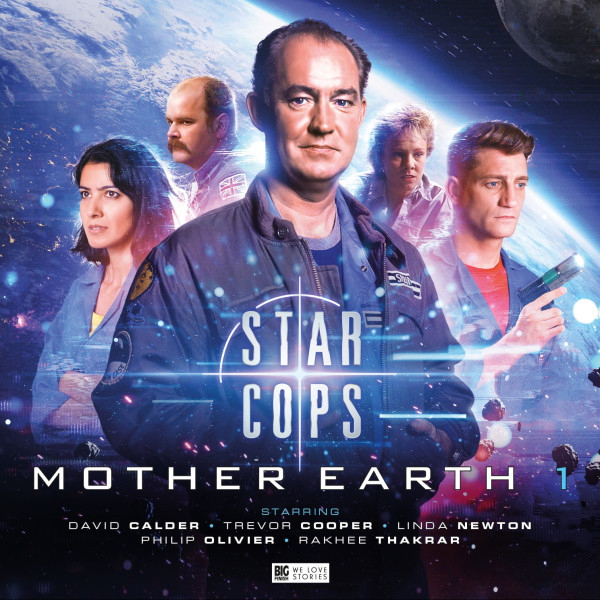 CD + Download
US $43.21
Buy
Download
US $37.03
Buy
Save money with a bundle Login to wishlist
24 Listeners
recommend this

While dealing with crimes including drug smuggling and murder, the Star Cops find themselves facing a new and sustained threat. The activist group Mother Earth, ideologically opposed to humanity’s presence in space, has been quiet for some time. But no longer. The group returns with a vengeance, prepared it seems to go to any lengths to achieve its aims.

1.1 One of Our Cops is Missing by Andrew Smith

As construction of the Vasco da Gama, the largest space station ever put into orbit, nears completion, Nathan is visited by an old friend, who asks for his help in tracking down a missing undercover officer.

Meanwhile, Inspector Priya Basu is investigating a near-fatal spacewalk accident on the space station Rakesh Sharma that may be no accident at all.

1.2 Tranquillity and Other Illusions by Ian Potter

A murder at the historic scene of the first Apollo moon landing offers few clues for the Star Cops. Why would anyone want to kill Philip Hughes, a property entrepreneur? And what has become of the mysterious woman who was with him at the time? The investigation leads to a moon outpost, where anyone may be the killer.

Tech Tower is a state of the art, high-security, high-technology building located in Paris. It seems the ideal venue for an international conference on how to counter the growing threat from the Mother Earth group.

Nathan and Priya attend as representatives of space policing. Soon, they and everyone else in the building find themselves in danger as a disruptive attack by Mother Earth coincides with a plot by criminals to carry out a high stakes robbery.

A failed bombing of Moonbase provides the Star Cops with an opportunity to strike back at Mother Earth. Paul Bailey is called on to use his undercover skills once more.

But Mother Earth is about to escalate its campaign of violence with a spectacular attack. And the Star Cops are among those in the firing line.

When we meet them, PAUL BAILEY (Philip Olivier) is an undercover officer with an Earth force, and PRIYA BASU (Rakhee Thakrar) is the resident Star Cop on the Indian Space Station Rakesh Sharma. Joining them is SHAYLA MOSS (Nimmy March), the newly appointed Moonbase Co-ordinator. Listen in to learn more.

Star Cops: Mother Earth Part 1 is bound to exceed the expectations of anyone who takes a chance on it. Grounded in reality, there’s not an extravagant performance to be found: it’s all genuine. Every character is believable, even the despicable. The writing is sharp, balanced throughout, and escalates appropriately.

There is huge scope in this series. Oh, welcome back Nathan. Please don’t leave it so long next time. It won’t be easy – waiting for the second set.

The whole set captures the atmosphere of the original and there’s new title music (no singing this time). This is a well-conceived world, with great storytelling and strong characters. 9/10

This new version of Star Cops offers a fresh lease of life to a great series and the production is tonally spot on, with smart scripts and strong characters. The stories are well directed by Helen Goldwyn and backed by excellent, era-appropriate sound design from Martin Montague. It may have taken over thirty years, but we are thrilled to have the Star Cops back!

Shop all audiobooks
Next release in this range: Star Cops: One of Our Cops is Missing (excerpt)