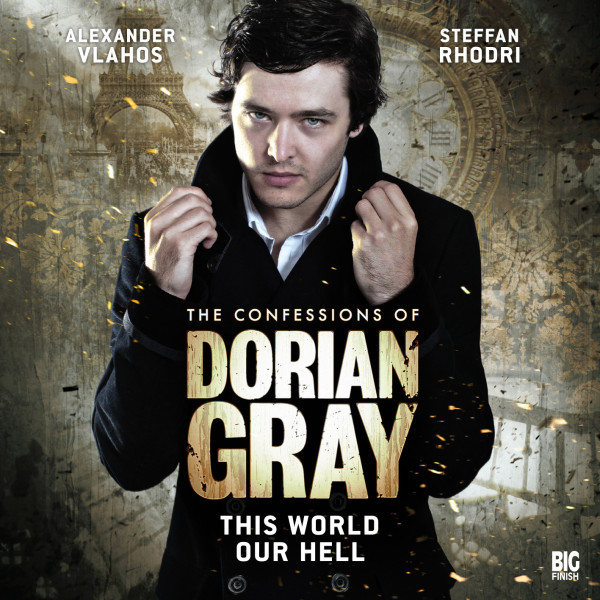 This release contains adult material and may not be suitable for younger listeners.
Login to wishlist
3 Listeners
recommend this

Paris, 1900. One of Dorian Gray's oldest friends is on his deathbed, locked away in a room at the notorious Hotel D'Alsace, where he is fighting a duel to the death. And when Dorian comes to visit him one last time, both men realise they may never be allowed to check out…

Alexander Vlahos introduces The Confessions of Dorian Gray, and the titular character he plays

Hi Alex. Welcome to the Big Finish fold! How did you come to be involved in The Confessions of Dorian Gray?
Through working with Big Finish on several projects and producer Scott Handcock really. I did a Big Finish episode of Bernice Summerfield playing Dorian Gray which was set in the far future – a version of Dorian Gray that’s quite different from the version in this new series, mind you. As we were recording that episode, Scott mentioned that it would be a great idea for a series. At the time, I just laughed and thought, ‘I’ll believe that when I see it!’ Cut to a year and a half later, and there I was getting these scripts sent to me. It was pretty mental – in a good way.

What did you make of the premise when you first heard about it?
I thought it was equally bonkers and brave. I was terrified too, at the thought of having to be the main person of the series. That it was relying on me to carry it in some way. Usually I’m used to rocking up at the studio to be greeted by well-known actors, whose projects I’m guesting on – not the other way around. It was brilliant though, I’m in huge debt to Scott and Big Finish for the opportunity to tackle a challenging role. It’s rare that an actor gets given this chance so early into a career.

What can you tell us about the stories that make up †¨the series?
Each of them has been penned by writers who have risen to the challenge of writing for such a complicated anti-hero character as Dorian. I’ve been blessed by the scripts – such fun to read first time around, then heaps more fun to actually record. We have the last meeting of Oscar Wilde and Dorian, a story set right in the heart of Blitz-torn London which contains horrifying ghosts, a leap across the pond to a Singapore dragon duel, a heartbreaking love story between two unlikely candidates smack in the middle of the Eighties, and to cap it all off, modern day London and Dorian has found himself as an unlikely king – king of the economy! – and is faced with a weird monster from a very unusual source…

Sounds like there’s a lot going on! So what was it that appealed to you about the series, and what do listeners have to look forward to?
It has everything. It’s breaking new ground with what Big Finish has done before, I think: a horror series that has at its heart a character who, for most people, is the epitome of an anti-hero. Dorian is complicated, not your usual protagonist. People expecting the Dorian from the book will be pleasantly surprised as to where this series is taking him. I’ve made some bold choices on him, I hope people will just run with it.

The Confessions of Dorian Gray also marks the first Big Finish audio to be recorded in Cardiff. How did that compare to your previous experiences?
Recording in Cardiff was a delight, if a little unconventional… I did miss the studios in London at first, but when we got started, the layout and the feel of the new studio, I felt, fitted perfectly to what we were trying to achieve. It felt like Dorian. It added a sense of atmosphere that I hope will be apparent to the listeners.

And Dorian’s not the only thing you’ve been occupied with lately. What else have you been up to?
Currently, I’m coming to the end of an eight-month shoot for the BBC, playing Mordred in the fifth season of Merlin – which has been the most amazing experience. I’ll be sad to finish in October, but looking forward to what else is on the horizon… and of course this series, which I’m incredibly proud of. Awaiting the reaction to this is going to be a little nerve-racking but it’s something I’m eagerly waiting for!