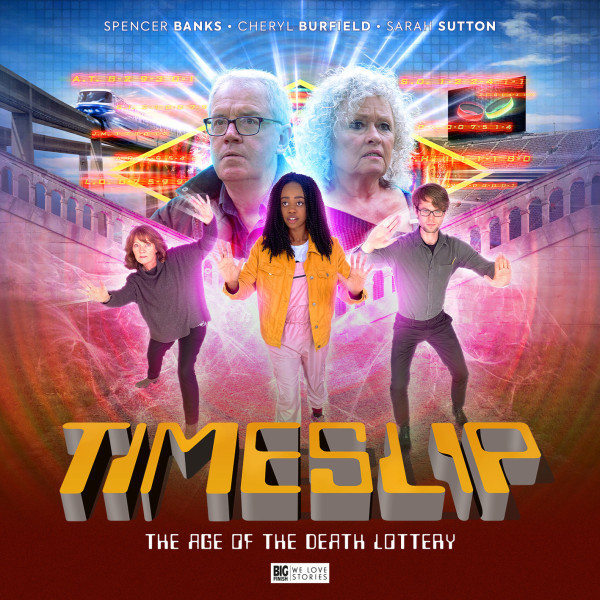 1. Timeslip Volume 01: The Age of the Death Lottery

CD + Download
US $30.94
Buy
Download
US $24.75
Buy
Save money with a bundle Login to wishlist
20 Listeners
recommend this

Decades after their childhood experiences passing through a mysterious ‘time barrier’ that could transmit people into the past and the future, two adults - Simon Randall and Liz Skinner - encounter two youths from the 1980s, Neil and Jade... and realise the barrier is open again.

Following them through the barrier in search of a missing friend, they find themselves many years into the future, when over-population has brought the Earth to its knees. So a radical reform has been undertaken - a mass culling of parts of the population known as the Death Lottery. Not everyone supports this idea. Rebels know as refusers battle the government and the sinister Enforcement Bureau - and Liz discovers that her old friend Charlotte may be responsible for the whole thing.

Recorded on: 6-8 November 2019
Recorded at: The Soundhouse

This is a punchy and fast-paced script that never lets up and, for people unacquainted with the original series, there is no disadvantage in the lack of knowledge of the original show. Helen Goldwyn is to be commended for her outstanding direction of the story and Jamie Robertson's sound and music design is of the absolute highest quality...

Banks and Burfield still work beautifully together after all this time, and it’s fascinating to hear them as adults in a mentoring role to the youngsters who find themselves in the place which Simon and Liz once occupied... A promising start to Big Finish's newest audio adaptation, and definitely bodes well for the next tale...

Shop all audiobooks
Next release in this range: Timeslip: The Age of the Death Lottery Part 1