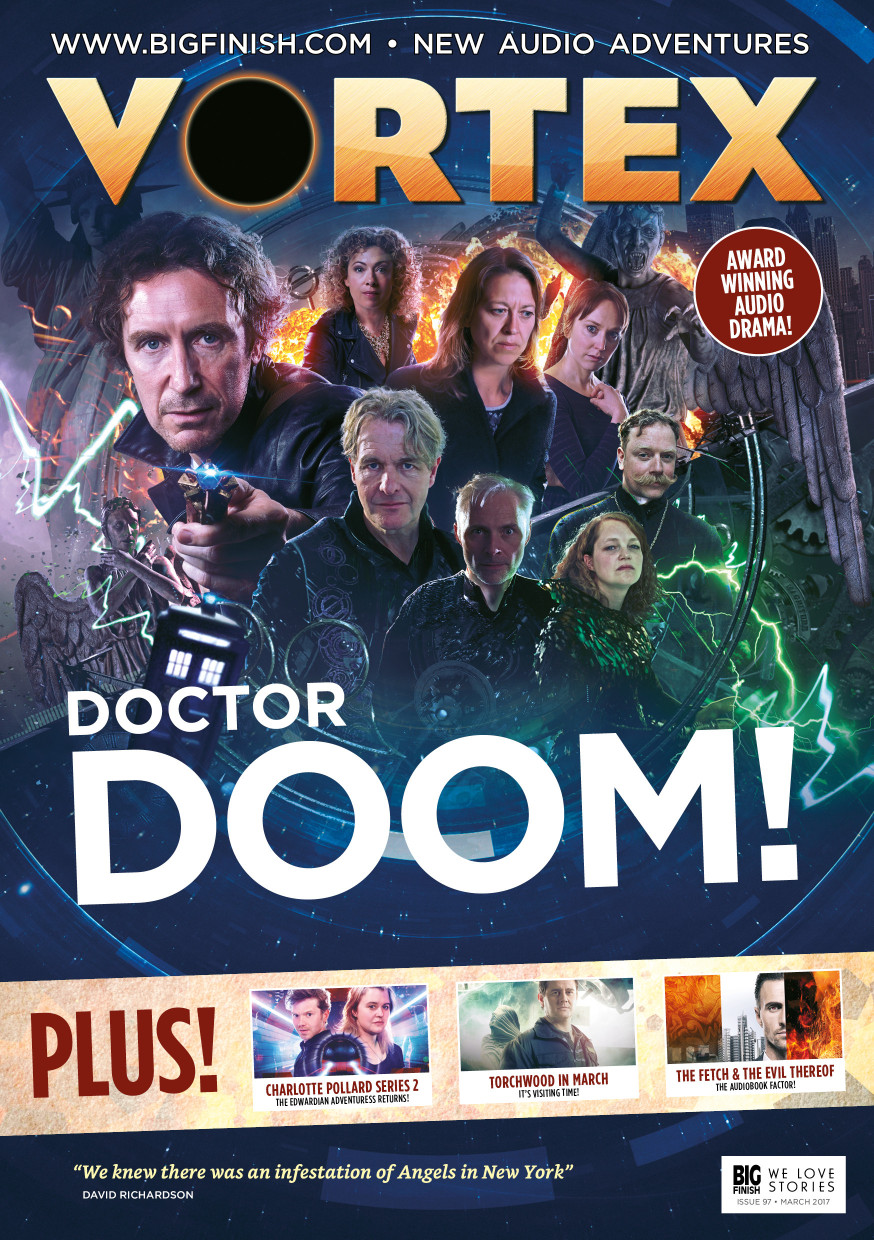 Another brand new, free magazine packed with exclusive photos and interviews from the people who make Big Finish all that it is.

It's been four series in the making, and this month Doctor Who - Doom Coalition concludes. Vortex talks to a wide variety of the people involved in bringing this epic story together!

And talking of Doom Coalition - we also cover Big Finish winning an award for Absent Friends, from the previous instalment of the series.

We've a sneak preview of the upcoming Jago & Litefoot - Series 13, as producer David Richardson gives a clue or two about what's coming for Henry and George...

India Fisher is back as the self-styled Edwardian Adventuress in Charlotte Pollard - Series 2: writer/director Nicholas Briggs joins India to talk us through this new collection of stories...

In March, Big Finish release two audiobook readings of supernatural thrillers The Fetch and The Evil Thereof, read by Carolyn Seymour and Barnaby Edwards. Writer Jack Gerson is also known for creating and writing chilling BBC series The Omega Factor and we discover what made these new titles such an irresistible proposition for the audiobook treatment!

The monthly Torchwood releases start again in March with Torchwood - Visiting Hours, starring Kai Owen and Nerys Hughes. Vortex gets to chat with writer/producer James Goss and look at what's coming up for the team...

This month marks the 40th anniversary of Mr Jago meeting Professor Litefoot in TV's Doctor Who - The Talons of Weng-Chiang. To mark the occasion the March Listeners' title (available all month for £2.99 on Download) is Doctor Who - The Companion Chronicles: The Mahogany Murderers, the first Big Finish story bringing Trevor Baxter and Christopher Benjamin back to these much-loved roles. Producer David Richardson and director Lisa Bowerman go back to May 2009...

If you'd like to send in a question or comment, please drop us a line on enquiries@bigfinish.com and mark your e-mail 'Feedback'!