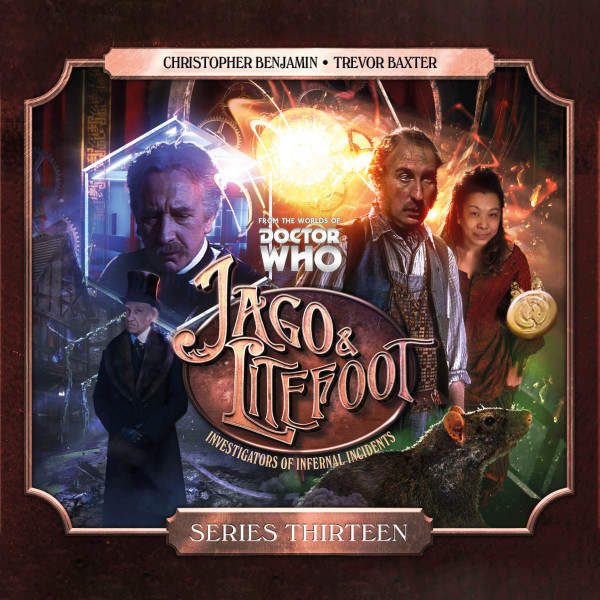 Someone from the future has arrived in Victorian London on the trail of a renegade… but that trail leads them to Henry Gordon Jago and Professor LItefoot.

So begins an adventure that will propel the Infernal Investigators into unknown territory, and an encounter with two people they should avoid at all costs.

13.1 The Stuff of Nightmares by Paul Morris

Litefoot and Jago are both suffering from strange waking nightmares. They resort to hypnotherapy to try to diagnose the problem. But meanwhile a Time Agent is looking for them – as a way of tracking down the notorious criminal Magnus Greel. Before they know what is happening, our heroes find themselves trapped in a dystopian future where nothing makes sense any more...

13.2 Chapel of Night by Jonathan Barnes

Trapped in a parallel world, Jago and Litefoot are enlisted to help Inspector Quick investigate the mysterious Chapel of Night run by Mrs Bartholomew. Needless to say, there is more to the chapel – and Mrs Bartholomew – than there initially seems. Soon our heroes are caught up in another horrifying and dangerous adventure. But more to the point, can they ever get back to their own world again?

13.3 How The Other Half Lives by Matthew Sweet

Perhaps inevitably, Jago and Litefoot meet their counterparts in the world where they now find themselves.  The Litefoot in this world still owns Greel’s time cabinet, while Jago is also married to Xiu Xiu, a bar maid.  But Greel’s cabinet is not the only thing to survive from his time in this world – there is also a giant rat on the loose in the sewers beneath London…

13.4 Too Much Reality by Justin Richards

Jago and Litefoot meet their equivalent infernal investigators in this world – Aubrey and Betterman. Together they investigate sightings of a strange ‘demon’ and bodies that mysteriously fade away… Before long they discover a crashed spaceship, and find out the truth behind Mrs Bartholomew and the Chapel of Night.  But even with this mystery solved, will they be able to get home again?