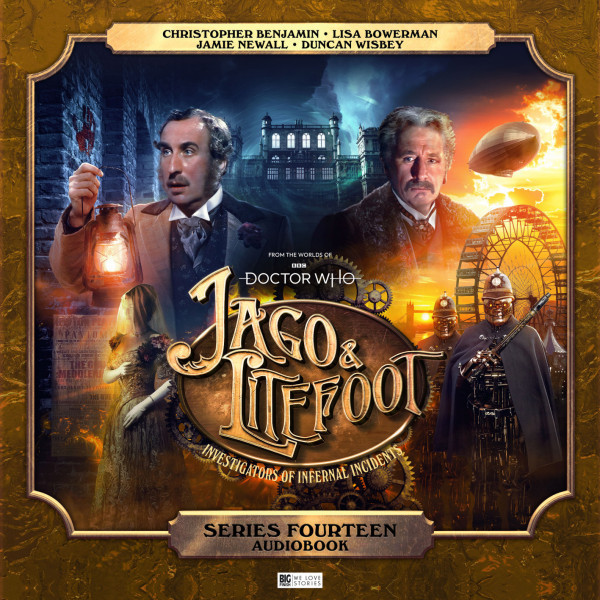 Pre-Order Digital
US $17.99
Buy
Login to wishlist
19 Listeners
recommend this

It's back through the streets of London with the devilishly daring duo of Jago and Litefoot!

14.1 The Red Hand by Simon Barnard and Paul Morris, adapted by Paul Morris and narrated by Jamie Newall

Returning home from their voyage to a parallel world, Jago and Litefoot find that things aren't quite as they left them. There's a terrifying new chief inspector, their closest friends have turned against them, and there's something that neither of them can remember. Their only hope to understanding their strange new world lies with a shadowy organisation called the Red Hand.

14.2 The Laughing Policeman by Jonathan Barnes, adapted by Julian Richards and narrated by Duncan Wisbey

Inspector Gilhooey is used to dealing with mundane crimes, but he's been given a new assignment, to root out enemies of the state. His investigations have led him to the Temperance Hall, where the Cotterill siblings are giving a seditious speech. However, Gilhooey discovers that the Cotterills aren't the only disloyal duo in attendance, there are two more traitors in the crowd: traitors called Jago and Litefoot!

In order to get closer to the truth of what's happened to the world, Jago and Litefoot are forced to split up. While Litefoot finds himself mixing with high society, Jago has to find a way to reach his friend, as the professor is trapped in a party that seems never to end...

It's time for the Christmas Day pantomime at the New Regency Theatre. Jago's more stressed than usual. Not only has he got to deal with a packed house, messy stagehands and peculiar acts, but there's a VIP coming. The problem is, this particular VIP can't possibly be coming, for one simple reason. They're dead.

Originally scripted as full-cast audio dramas, these tales have been adapted into audiobooks, each performed by a single voice actor.