You are here
Tags : General Big Finish News Captain Scarlet and the Mysterons

Out in September, we can now reveal the gorgeous cover for Captain Scarlet!

Spectrum Is Gold! Ready for pre-order, Big Finish can reveal the covers for the Captain Scarlet - the 50th Anniversary Boxset, which will feature five original mini albums, eight adapted TV stories, and a 60 minute documentary for the 50th anniversary of Gerry Anderson's Captain Scarlet. 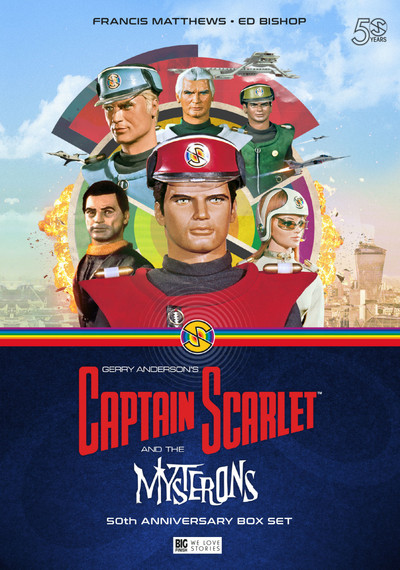 The Five Mini Albums include:

Captain Scarlet and the Mysterons by Angus P Allan

And the adapted TV stories are:

The Trap by Alan Patillo

The Launching by Peter Curran and David Williams

Jamie Anderson, director and producer of the upcoming Captain Scarlet releases, gave us a teaser of the documentary and what to expect, "For the 50th anniversary documentary, we were determined to make this the definitive documentary on the series - discussing not just the TV show itself, but the wider world of Captain Scarlet including the music, merchandise and comics. To achieve that we’ve conducted brand new interviews with key production team members like Mike Trim and Mary Turner - with many more contributors to be announced in the coming weeks.

But sadly so many of the production team are no longer with us. Thanks to the generosity of Susan Harman and the estate of Simon Archer (Gerry Anderson’s first official biographer) this documentary will also feature, for the very first time, archive interviews with key crew members like Derek Meddings, Christine Glanville and Bob Bell. These previously unpublished interviews will form the cornerstone of the documentary and provide many previously unheard stories from the show’s genesis and production. Further announcements about interviews for the documentary will be made in July and August!"

This deluxe boxset will be released in September to celebrate 50 years since Captain Scarlet originally appeared on our screens. We caught up with sound designer Benji Clifford, on bringing back the unmistakable sound of the Indestructible Captain Scarlet (which you can hear in the trailer above!)

Benji, how did you recreate that Spectrum sound? "It was a huge privilege to be asked to work on such a truly iconic British series as 'Captain Scarlet and the Mysterons'. It was really important for me to produce a gentle restoration of these materials, as they're such wonderful representations of the era they were recorded in. The main focus was to clean up the audio, removing any crackles, hisses and hums where possible. My goal with working on this box set was to preserve these audio recordings, so that both new listeners and the devoted Anderson fanbase can enjoy them for years to come."

Any difficulties you had in restoration? "In one extreme case, a recording was originally pressed to vinyl in which the tape reel actually got slower towards the end of the drama, this resulted in a massive drop in both speed and pitch. To accurately 'revive' the end of the episode, we had to digitally simulate the effects of reel to reel tape in order to accurately (and naturally) speed up the materials to correct the ending of the episode. In another strange coincidence, one of the master tapes sounded quite 'muddy' towards the end of the recording, it was only after a day of working on that episode that I went out to the local record shop and unintentionally discovered a near mint condition vinyl of the exact drama I was working on! Upon purchasing it, I found that the ending was of infinitely superior quality, so you'll find that very vinyl recording made it to the final mix."

What challenges did you have with bringing the TV episodes to audio? "These particular episodes were a mish-mash of different assets ranging from tapes of Ed Bishop's narration, right through to clean TV recordings of the original broadcasts. The goal was to mix these sources together seamlessly so that there weren't inconsistencies in quality."

"It's such an exciting thought that there are new stories being adapted! I'm a huge lover of retro television and have admired Gerry Anderson's work since I was a little boy - (yes I owned a Tracy Island playset). Captain Scarlet lends itself to the audio genre perfectly and it's nice that Big Finish and Jamie Anderson are able to continue that legacy to celebrate the 50th anniversary!"

You can pre-order this exciting release now, for £35 on download or £45 for CD. Every CD purchase unlocks a digital copy of the release, which works perfectly with the BF app! Keep checking the BF site for more information on this release, and for The Spectrum Files, more in the Captain Scarlet and the Mysterons range from Big Finish!