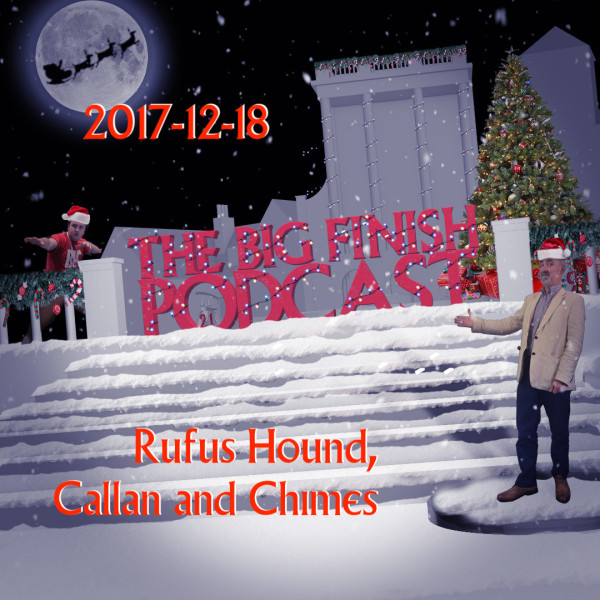 In a break from the usual format, we bring you the first of three 'pod-boxes' of seasonal delights, complete with festive music from Big Finish's musical genius Jamie Robertson.

There are some snippets of unmissable news and some brand new trailers, but mostly it's all about the interviews and the nostalgia this week. Well, it's that time of year, isn't it?

Rufus Hound - we present the second part of this fascinating interview with the actor/comedian/writer who has come to Big Finish to play the latest incarnation of the Meddling Monk. Be warned, he has forthright views. Never less than fascinating, though.

Frank Skinner and Ben Miles - the stars of our new series, Callan, based on the 1967 classic ITV spy thriller. A few moments after completing the studio sessions, Frank (who plays Lonely), Ben Miles (who plays the titular Callan) and Nick Briggs (who plays Hunter, head of The Section) sit down for a chat.

Drama tease - We present the first fifteen minutes of one of our proudest achievements, The Chimes of Midnight by the multi-award-winning Robert Shearman (starring Paul McGann and India Fisher) as a special Christmas treat, just to get you into the festive mood.

This podcast is officially released on Monday 18th December 2017. But it's been sneakily released on Sunday 17th December 2017, in case you're after an early, extra-Christmassy Sunday treat. You can download or stream it now simply by pressing one of those handy little buttons below this text. Go on, give your ear things a treat.

Check out other editions of the Big Finish Podcast in the range here, enabling you to put them into your account and listen via the Big Finish Listening app on Apple and Android devices!