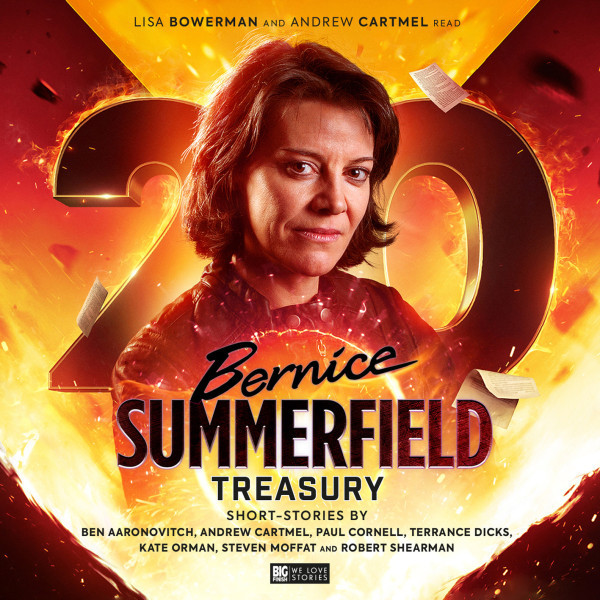 Download
US $24.39
Buy
Login to wishlist
6 Listeners
recommend this

The Evacuation of Bernice Summerfield Considered as a Short Film by Terry Gilliam by Ben Aaronovitch
A lonely orphan on a vast transport ship meets some peculiar fellow travellers.

And Then Again by Robert Shearman
Who is Bernard Summerfield? What’s happened to his life? And why has he lost his spot in the company car park?

Misplaced Spring by Paul Cornell
The Braxiatel Collection is recovering from an invasion in a variety of surprising ways.

Solar Max and the Seven-Handed Snake-Mother by Kate Orman
Bernice is on an expedition to a remote site. She’s about to discover something unpleasant about her fellow explorers.

Walking Backwards for Christmas by Ben Aaronovitch
How did we get here? Bernice looks back at her life using a history machine.

The Least Important Man by Steven Moffat
Gavin’s had a fairly miserable life, all of it watched over by the ghostly figure of a woman silently commenting.

Bernice Summerfield and the Library of Books by Andrew Cartmel
Inside an ancient library is an ancient secret. The secret is, of course, deadly, but it’s deadly in an entirely unique way.

A Mutual Friend by Terrance Dicks
Bernice Summerfield learns why you should always talk to the person you’re sharing a table with at a cafe.

This set does that legacy justice and is well worth your time.

Each author brings his or her unique style to the mix without a single weak link in the collection. The real treat, however, is Bowerman’s indelible voice acting... Treasury is an excellent celebration of her various adventures. Written by some true talents in the genre and voiced by the brilliant voice talent of Lisa Bowerman.

Shop all audiobooks
Previous release in this range: Bernice Summerfield: Benny in Wonderland