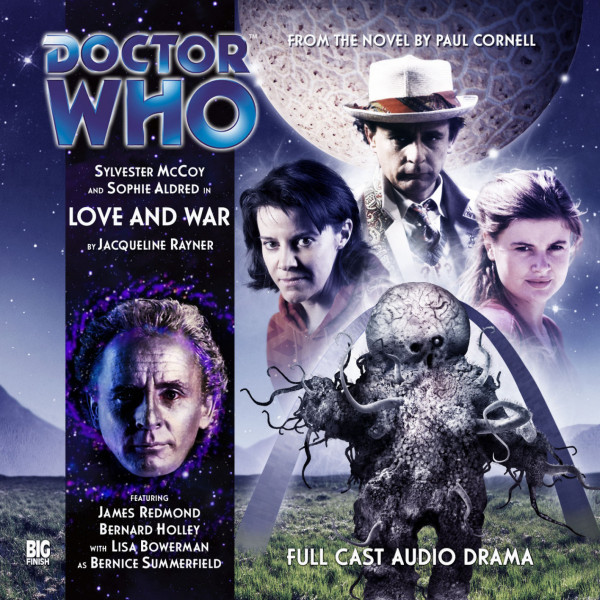 1. Doctor Who: Love and War

CD + Download
US $17.92
Buy
Download
US $12.99
Buy
Save money with a bundle Login to wishlist
30 Listeners
recommend this

On a planet called Heaven, all hell is breaking loose.

Heaven is a cemetery for both humans and Draconians - a final place of rest for those lost during wartime. The Doctor arrives on a trivial mission - to find a book, or so he says - and Ace, wandering around Joycetown, becomes involved with a charismatic Traveller called Jan.

But the Doctor is strenuously opposed to the romance. What is he trying to prevent? Is he planning some more deadly game connected with the coffins revered by the mysterious Church of Vacuum and the unusual Arch that marks the location of a secret building below ground?

Archaeologist Bernice Summerfield thinks so. Her destiny is inextricably linked with that of the Doctor, but even she may not be able to save Ace from the Time Lord's plans.

This time, has the Doctor gone too far?

A new adaptation of the Virgin New Adventures novel which introduced Bernice Summerfield; also contains the prelude from Doctor Who Magazine and a behind-the-scenes documentary about the making of the story.

Producer Scott Handcock provides a diary covering the making of Doctor Who: Love and War

It was the summer of 2011 when fellow producer Gary Russell and I were mulling over ideas for how to celebrate the twentieth anniversary of Bernice Summerfield. It’s quite a milestone for a spin-off character, and the fact she’s remained consistently popular was worthy of celebrating so, whilst we knew we had two box sets, two books, and were already pulling together our plans for the charity mania that is Many Happy Returns, we still felt we needed to honour her roots somehow.
‘How about a Companion Chronicle?’ I foolishly suggested, most probably over e-mail. ‘We could reunite Lisa [Bowerman, Benny] with Sylvester [McCoy, the Doctor] and Sophie [Aldred, Ace] and set something during the New Adventures that taps into her history. Hey, we could even call it War and Love!’
I chuckled. (No one else did.)
Lovely line producer David Richardson then came back and, instead of nodding politely and backing away as he normally does, suggested something even better. Something we’d considered, then disregarded as out-of-the-question: a full-cast adaption of Bernice’s very first adventure, Love and War.
Now, I’ll be honest: I loved this idea. The chance to work with Sophie and Sylvester was irresistible, and – even though I was too young when the novel came out – I obviously knew of its standing in fandom, and that the pressure was absolutely on to get it right. This is a unique release, a one-off – novels don’t always suit other mediums (though this one did). Either way, we had to make it count.

Thankfully, Bernice’s creator, Paul Cornell, was on board from the off… possibly before we even mentioned the idea. He likes to say ‘yes’, does Paul. His one proviso, which we’d already pre-empted because she’s marvellous, was that Jacqueline Rayner would be the writer we asked to adapt it. (Now, as anyone who’s aware of why we’re producing a charity adventure will know, Jac’s schedule is not always necessarily an easy one to navigate, but when she commits, by God does she commit. And she really rose to the challenge of bringing such an iconic book to life!)
By now, it was September. Ish. We knew we had to record in January to accommodate everyone’s schedules, so we just had to sit and wait, twiddling thumbs and tapping at tables. It’s a strange experience waiting for a script where you already know what’s going to happen. The anticipation’s still there, but for completely different reasons. You want to know if it still stands up, if it keeps your attention, if it feels fresh and new and exciting!
Which, as we discovered upon delivery in December, it does. Very much so. There’s a real sense of jeopardy and pace. It’s a whirlwind of characters and situations and events: new friends, ancient enemies and all manner of people in between. Then, because I am a fool who doesn’t quite know when I have enough on, I dug out the old Prelude from the pages of Doctor Who Magazine and another e-mail exchange ensued:
‘Hey! Wouldn’t it be fun if we adapted the Prelude too and released that beforehand, just like they did back in ’92?’
‘Do it!’ came the reply. So we did. And it adds a whole new dimension to the story: a sense of dread and impending melancholy, all brought to life so beautifully by Sophie. (Seriously, download it, listen to it! Whet those appetites!)
And so, we had scripts. All we needed was a cast, so Gary called upon all manner of actors, old and new, to come and play. James Redmond is a loveable, gentle Jan. Bernard Holley is a villain who genuinely could seduce you into suicide. Maggie Ollerenshaw’s exactly as you imagine Ace’s mother… in fact, everyone’s at the top of their game, whether they knew the novel or not. The characters really do leap off the page, and everyone knew exactly what they were doing. (Special mention goes to Sophie Aldred for channelling Nineties Ace, and really driving the narrative all the way through. That woman astounds me more than ever!)

It’s probably a cliché – Big Finish recordings are generally full of laughter and merriment, usually after lunch – but Love and War felt genuinely special. Reuniting the three leads was particularly joyous, especially out in the green room… So much happened on those days: we persuaded Sophie to sign up to Twitter, we ate lots and lots of trifle, and Sylv randomly stepped into the courtyard at one point, where a gust of wind caused a designer skirt to land atop his head. Mad, fun times!
Then it was in the can, recorded. Months of work, two days in studio, and it felt like it was over – but then it all begins again. We handed it over to our post-production supremo, Steve Foxon, who has pulled the whole thing together and made it sound amazing, truly amazing. And Andy Lambert did the cover – that new striking image, which now seems somehow more iconic than the novel that spawned it.

Love and War’s a very special release, celebrating twenty years of Bernice Summerfield. Why do you think the character’s endured the way she has?
She was originally created to be the domestic foil to a very cosmic Doctor, and I think there are all sorts of things that need deflating like that. In truth, I’m continually surprised and pleased by her success.

Why do you think she was chosen as the Doctor’s new companion all those years ago?
Maybe because the audience was getting older too, and the idea of a companion with an older point of view appealed.

How did you react when the idea of adapting the novel was first put to you by Big Finish? Were you protective at all?
I wanted to make sure it was done well, but when I heard they wanted Jac Rayner to do it, it was clear that it would be. And I got to just take a quick look and cross a few Ts. I’m after that ‘mucked about with’ credit that Terry Pratchett gets on his TV adaptations.

Obviously when you wrote the novel, you already had Sylvester and Sophie’s voices in your head. What was it like hearing them bring those words to life – and Lisa, who didn’t become Bernice for another six years after it was printed?
It’s quite startling how Lisa’s inhabited the character to such a degree now that her saying this dialogue seems natural rather than strange. And Sylvester and Sophie really sound right for it too. It all seemed to fit together quite remarkably well. The story’s been streamlined a bit, but that was necessary, and the cutting is done so well that I don’t think, unless you read the novel the week before, you’ll notice what’s been got rid of.

What do you think the appeal is of this audio for those who read the original novel?
It’s that it’s done with actors, on audio, and thus with an infinite budget. And you get the Doctor Who Magazine prelude thrown in. It’s a love song to the New Adventures, really, and I think, for the uninitiated, a good introduction to Bernice.

Shop all audiobooks
Next release in this range: Doctor Who: The Highest Science