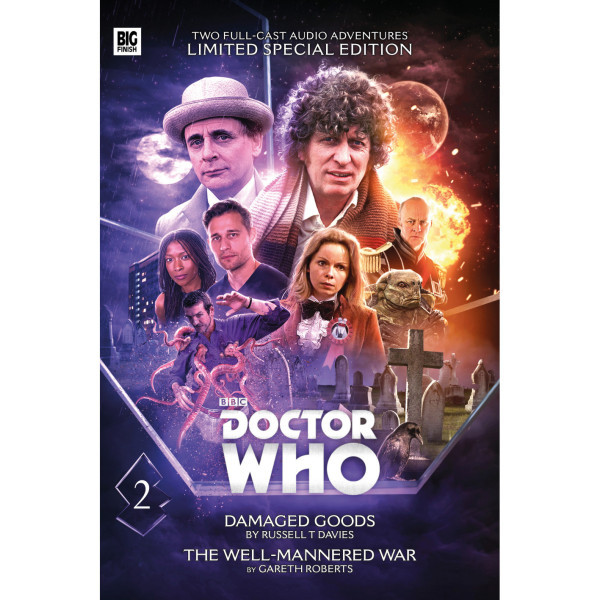 Download
US $29.99
Buy
Save money with a bundle Login to wishlist
17 Listeners
recommend this

The Well-Mannered War by Gareth Roberts, adapted by John Dorney

Laid claim to by disputing factions of humans and Chelonians, the planet Barclow has become the catalyst for an unusual war. In two hundred years of hostilities, not a shot has been fired, and the opposing combatants are the best of friends.

But when the Doctor, Romana and K9 arrive, they discover the peace is not going to last. Something dangerous is happening behind the scenes. An election looms. Bodies are piling up. Tensions are growing. Someone somewhere is trying to make this well-mannered war very angry indeed.

Only the Time-travellers can save the day. But that might be their biggest mistake.

Based on the original 1997 Missing Adventures novel by Gareth Roberts.

The year is 1987 and there’s a deadly new narcotic on the streets of London. As part of their investigations, the Doctor and his companions Chris and Roz move into the Quadrant, a rundown housing estate. An ancient alien menace has been unleashed, a menace somehow linked to a local gang leader known as The Capper, a charmed young boy called Gabriel and his mother Winnie, the enigmatic Frei Foundation, and Eva Jericho, a woman driven to the brink of madness.

As London descends into an apocalyptic nightmare, the Doctor must uncover the truth about the residents of the Quadrant and a desperate bargain made one dark Christmas Eve.

Based on the original 1996 New Adventures novel by Russell T Davies.

A special 120 minute extended cut of the Disc 5 documentary is exclusive to the Big Finish website.

Shop all audiobooks
Previous release in this range: Doctor Who: Novel Adaptations Volume 01: The Romance of Crime/The English Way of Death (Limited Edition)