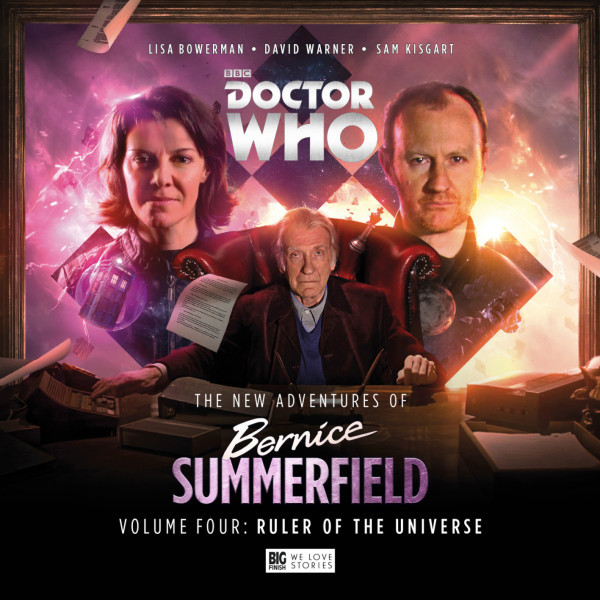 4. Doctor Who: The New Adventures of Bernice Summerfield Volume 04: Ruler of the Universe

CD + Download
US $36.26
Buy
Download
US $30.22
Buy
Save money with a bundle Login to wishlist
28 Listeners
recommend this

Bernice Summerfield is still trapped in a dying universe with the wrong Doctor.

Things have taken a turn for the worse - the Doctor has become President Of The Universe and, it turns out, he's a controversial choice for the job. While Bernice works to unearth the mythical Apocalypse Clock, the Doctor's immersed in the murky world of politics and the dark forces that are working against him.

As battlefleets fight and terrible deals are done, the peoples of the universe wonder if they've made a terrible decision. Is the Doctor up to ruling the universe?

Watching from the sidelines, the Master is quick to reassure everyone that he has no ambitions in that direction.

And, meanwhile, the stars are going out...

4.1 The City and the Clock by Guy Adams
Bernice is on an archaeological dig for the mythical Apocalypse Clock. Can it really be the key to saving the universe? The ghosts of the planet have other ideas.

4.2 Asking For a Friend by James Goss
Vast wars are raging across the stars, planets are dying, and the Doctor is sat on a psychiatrist's couch. What's it like to be the Doctor's therapist?

4.3 Truant by Guy Adams
The President of the Universe has run away. Bernice has to hunt him down, but he's too busy having fun. Evil warlords! Impossible escapes! Sinister plans! The Doctor's on an adventure.

4.4 The True Saviour of the Universe by James Goss
Bernice finds that time has run out for the Doctor and the universe. Is this really the end of everything? Help is on hand from an unlikely quarter.

Full of intelligence, wit and humour and are bolstered by the brilliant chemistry between Lisa Bowerman and Warner... A brilliant subversion of the usual Doctor Who format.

This is phenomenal... an absolute masterpiece.

Smart and funny, with both Bowerman and Warner clearly having a ball, it feels like there are plenty of stories left to tell with this pairing.