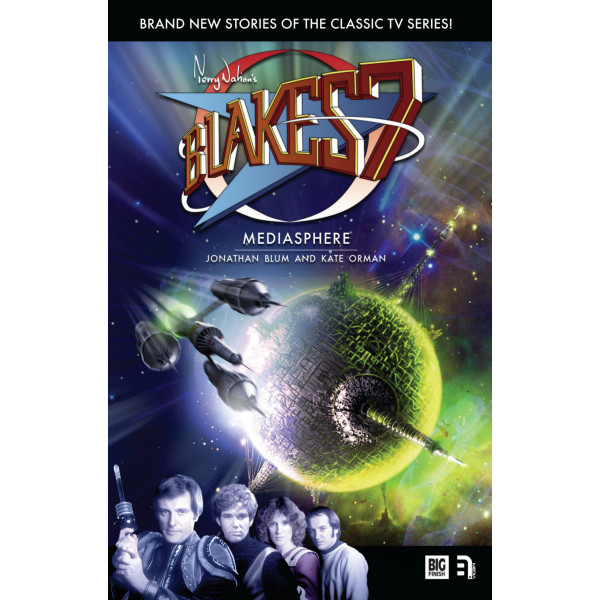 The Liberator crew infiltrate the Mediasphere, a space station which produces the Federation's propaganda and popular entertainment. But who is really controlling the Mediasphere - and scripting a series of deadly encounters for our heroes?

BF: So, you've just finished work on your new Blake's 7 book. Tell us a bit about it – what is the Mediasphere?

KATE:  Mediasphere is a vast space station from which the Federation broadcasts mindless entertainment and news to keep its citizens cheerful and content. The crew of the Liberator want to get to the news before it's rewritten to suit Federation propaganda purposes, so they infiltrate Mediasphere – only to discover that it's run like a prison camp: the cameras never switch off. Only happy, patriotic images are allowed to leave – certainly not malcontents or spies.

JON:  It becomes a caper movie planned by Avon and Cally, where Dayna basically joins Hot Gossip in an entertainment gulag, Vila gets a writing job on an alarmingly familiar comedy, the news director thinks he’s running the empire, there’s mutterings of industrial action, and lots of things getting wiped in the video vault. We wanted to do something which evoked the mix of real Orwellian danger and warped humour which really sums up a certain style of Blake's 7 – the glam surface of “Gambit” with the black satirical drama of “Deathwatch”. And it's sort of our love letter to that whole late-seventies BBC Television Centre environment, where Blake's 7 was happening just down the hall from Top of the Pops and The Goodies and Grandstand and the Sunday classics – they say that Orwell was partly inspired by the BBC anyway, so it all fits!

KATE:  Let's be honest –when it comes to the media, the line between truth and satire has become a pretty thin one.

KATE:  Surreal! I was only nine or ten when I first saw Blakes 7. Something I especially enjoyed about writing "Mediasphere" was approaching it as a science fiction novel, but keeping in mind the level of technology we see in the show – trying to get that seventies future feel.

JON:  For me it really was a bit of a teenage dream come true! A lot of my own work has been heavily influenced by Robert Holmes and Chris Boucher, so this was a chance to go right back to my roots. It really startled me how natural it was for me to write in these characters' voices – Vila and Orac in particular, once they got started they wouldn't shut up!  We did a read-through of the draft manuscript with some friends, and when they started spontaneously doing impressions of the characters as they read, we knew we were on to something...

BF: How did the storyline come about?

JON:  Well, the editors asked for a Dayna book, but once we started looking at the episodes from her point of view, we realised how much dramatic material there is for her. Unlike a lot of the other characters in the show, we get a clear sense of her normal life and family first, and then see it all ripped away.  "Mediasphere" is set shortly after "Powerplay", when she's still reacting to that, and the question of where she'll go from here is still up in the air for her – much like it is for all the rest of the crew, really! There's a central question in the book of who they are if they're not actually Blake's seven any more – or in Dayna and Tarrant's cases, they never were... we're showing them learning to function as a new team. Dayna's completely out of her comfort zone, and she has to learn fast and discover her limits. And she's got this great combination of having a sort of youthful innocence, and also being at least as cold-blooded as Avon. Lots of scope to show her growing into her own!

KATE:  Dayna still stands up today as a vigorous and multi-dimensional female science fiction character. She's a highly intelligent and educated young woman who's been isolated from the human race for most of her life. She meets her new world with curiosity, skill, wit – and a fair bit of bloodthirstiness! I hope we've done her justice.

There's a balance between action and dialogue that gives the book a fast-paced feel... (and) some excellent descriptive passages, notably the interludes from Dayna's childhood. That's where this second-generation Blakes 7 fiction from Big Finish is so strong - because it fills in some of the gaps in the saga. In Mediasphere, it's certainly done in an entertaining way.