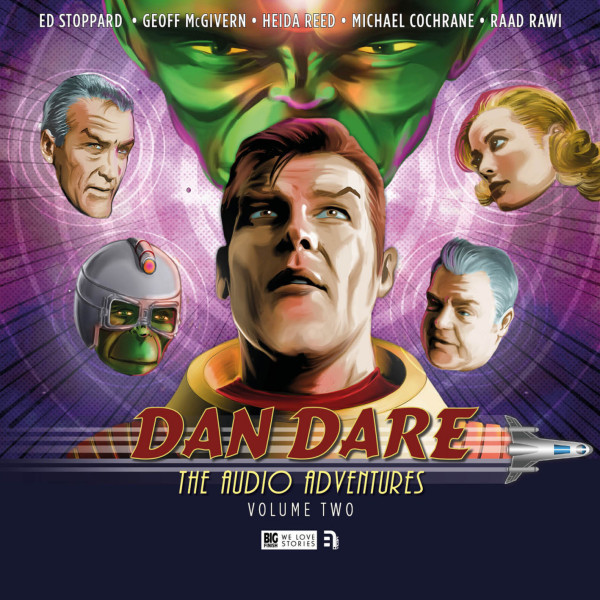 CD + Download
US $37.42
Buy
Download
US $25.00
Buy
Save money with a bundle Login to wishlist
9 Listeners
recommend this

Episode 4 Reign of the Robots by Simon Guerrier

Dan Dare and his crew finally return to Earth. Landing in central London, they find the city deserted - or that's how it seems at first. But soon Dare faces an army of ruthless machines, robots who have conquered the planet and placed the surviving humans in slave camps. The robots are too powerful and too numerous to be resisted, and their invasion is complete. With limited resources, Dare, Digby and Peabody face their greatest challenge yet - to liberate planet Earth. But the task becomes more desperate than ever when Dan discovers the alien force behind the robot invasion...

As work begins to rebuild planet Earth after the devastation of the robot invasion, Dare and his friends in Space Fleet remain vigilant, certain that it is only a matter of time before the Mekon launches a fresh attack. When the wreck of the Nautilus - an experimental ship lost over a decade before - appears in orbit of the moon, Dare, Digby and Peabody are sent to investigate. They find the ship and its crew were destroyed by advanced alien weapons. All clues lead them to Saturn’s moons. With Earth still vulnerable our heroes must journey to an unknown world - to discover who sent the Nautilus back, not realising that for once the source of their latest conflict comes from a lot closer to home. Not all would-be conquerors of planet Earth are alien...

After a sequence of near non-stop adventures Dare, Digby and Peabody find themselves in a strange limbo of paranoid calm. Whilst there’s been no sign of the Mekon anywhere in the solar system, Dare is certain Earth hasn’t seen the last of the evil alien. Mysterious spaceship disappearances near Venus, an Academy student accidentally launching a prototype new spacecraft, and a floating prison cell in space... reveal themselves as all part of the Mekon’s latest plan to defeat his arch-enemy Dan Dare once and for all. The first season of Dan Dare concludes with daring space action, fearless heroics and the revelation of devastating secrets concerning Space Fleet...

A fourth bonus disc contains a documentary about the making of this series.

"For me, this audio revival of Dan Dare is a triumph. Each of the three episodes have the feel of an audio movie and it is easy to get pulled into their world. 10/10," Indie Mac User

"The cast and crew constantly deliver top grade material and each episode enriches the next… Dan Dare Volume 2 is a must! 9/10," Blogtor Who

"The first series of Dan Dare adaptations was one of the best collections of audio fiction I've heard in a long time. The combination of old school British space heroics and a distinct, post-BSG mindset paid off again and again and set it up as a hopeful, if cautious, vision of the future. Volume 2 is even better. 10/10" Sci-Fi Bulletin