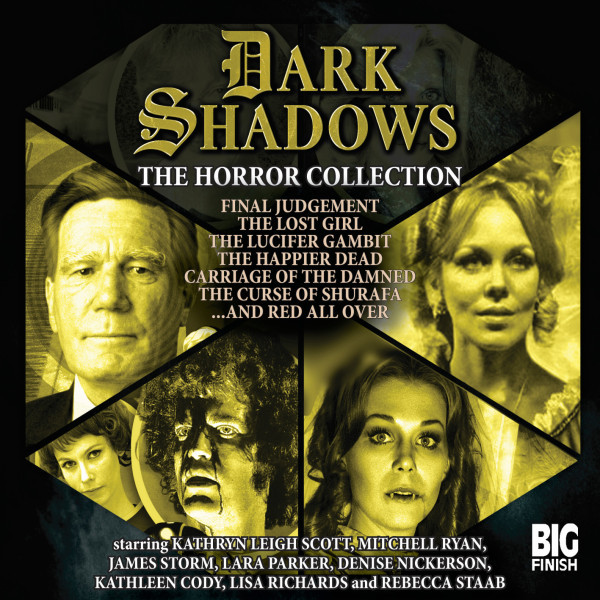 Download
US $36.95
Buy
Login to wishlist
6 Listeners
recommend this

A new digital collection of seven horrific tales from the worlds of Dark Shadows.

“Do you swear to reveal to this jury of your peers, the truths you’ve withheld from your lord and master?”
In the afterlife, Josette has made a pact with the Dark Lord to try Angelique for crimes against true love. But Josette’s time spent as a restless spirit has taken its toll. Is she strong enough to take on her old adversary? If Angelique is convicted, then her soul is forfeit, restoring Josette to life and beauty. If not...
The Lost Girl by D Lynn Smith
"Hope is his cruellest torment."
Josette DuPres Collins gambled her soul, and lost it, in an ill-conceived bid to destroy her rival Angelique. Now the Dark Lord has sent his emissary to bring Josette to her place in Hell.
Only a last-minute intervention can give her a final chance at redemption. But, as Josette struggles to win back her soul, she realizes that her guide's life, and soul, are inexorably intertwined with her own.
And so, as the sands of time flow, Josette begins her final journey…
The Lucifer Gambit by Eric Wallace
"Don't live in the darkness, Amy Jennings."
Adolescence is difficult enough, especially when your family members are vampires and werewolves. But somehow Amy Jennings survived it.
Now a young woman, Amy has come back to Collinsport, determined to forget the horrors of childhood and start anew. But growing up means confronting the truth about the world around you and Amy's rite of passage has only just begun.
Drawn into a world of obscene wealth, blind seduction, and cold-blooded murder by the irresistible Dominic Randall, Amy is about to learn that passion burns. But so does a woman's scorn… because falling in love can be incendiary.
The Happier Dead by Adam Usden
“Collinsport Hospital is where you come if you want to die.”
But no one is dying at Collinsport Hospital, even those who wish to.
When student parapsychologist Amy Jennings is rushed into intensive care, she reluctantly begins to investigate, and soon finds the hospital morgue is anything but empty. But who is behind it? And what could they possibly want?
Amy might be guaranteed to make it out alive, but she is about to discover there are fates far worse than death.
Carriage of the Damned by Alan Flanagan
“Forgive me, I wasn't myself.”
For Sabrina Jennings, tonight may be the most important night of her life. She has climbed aboard a cross-country train to find a cure to her werewolf curse, a journey that will bring her face to face with the long-dead murderer Gerard Stiles.
But when the carriage is abandoned on the tracks, leaving the passengers trapped and at each other's throats, Sabrina's well-laid plans fall to pieces.
Who is trying to manifest the power of Stiles for their own ends? Will the passengers be able to escape before another train collides with their carriage? And just what is the mysterious Hallie Stokes doing on board?
The Curse of Shurafa by Rob Morris
“You drank from me, vampire. Shurafa draws closer because of you.”
Barnabas Collins is a desperate man.
In Cairo’s great cemetery, the City of the Dead, an ancient tyrant is plotting his return from the grave, and Barnabas has been chosen to assist in his rebirth.
When the city begins to burn, Barnabas is coerced into assisting his escape by murdering a young girl. But the reluctant vampire faces resistance from his conscience: a brilliant scientist by the name of Julia Hoffman.
Faced with a difficult choice, Barnabas finds that whatever path he takes could result in the loss of his closest friend.
And Red All Over by Cody Schell
“We collect on our debts, but when the debt is uncollectable, we cut our losses. You have until sunset.”
Newlywed Maggie Haskell has started a life away from Collinsport with her husband Joe.  But before their honeymoon can start, Maggie finds herself trapped in a cabin in the woods with a strange man. A strange man with a familiar face.
With time running out, Maggie has to buy her freedom.  But her captors will only accept one thing.
Who are the faceless men holding her captive and what do they want?  Where is Joe Haskell? And who is the man with the face of Burke Devlin?
Recorded on: TBC
Recorded at: TBC

Shop all audiobooks
Previous release in this range: Dark Shadows: Welcome to Collinsport