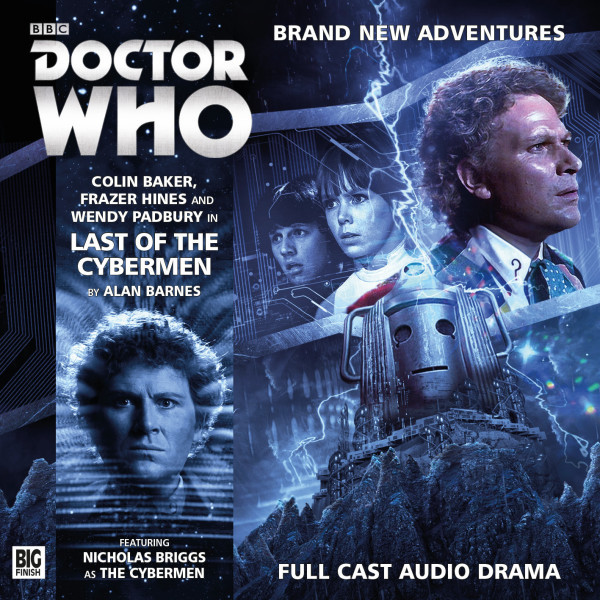 199. Doctor Who: Last of the Cybermen

It's been ten years since the final assault on Telos, the last act of the Great Cyber War. Thanks to the Glittergun, humanity prevailed – and the half-machine Cybermen were utterly obliterated.

Out on the furthest fringes of the galaxy, however, they left their mark – in the form of a giant Cyber-head, hundreds of feet high. A monument? A memorial? A tomb? The Doctor, the Cybermen's most indefatigable adversary, sets out to investigate... but he fails to return to his TARDIS. Leaving the Ship, his two companions – brave Highlander Jamie MacCrimmon, and super-intelligent Zoe Heriot – find a stranger in the Doctor's place. A stranger in a coat of many colours, who insists that he's the Doctor – transposed in time and space with one of his former selves...

But why here? Why now? Has the universe really seen the last of the Cybermen..?

The Cybermen are weird – on TV, the less they say, the more effective they are, I think. After The Moonbase, they barely speak for the rest of the 60s! It’s the Cyber-Controller who does almost all of the talking in The Tomb of the Cybermen, and the Cyber-Planner in The Invasion – in fact, I think I’m right in saying that there are only about three actual Cybermen lines in all eight episodes of The Invasion! So part of my mission in Last of the Cybermen was to square that circle – between the almost mute invaders of The Invasion, and the frankly chatty Cyber-Leader of Revenge of the Cybermen, in the 70s.

The wider ambition, though, was to tell a story that filled in the gap of their great unseen defeat, supposedly brought about by the ‘glittergun’ (it’s appalling that we don’t even see one in Revenge!). Once I started thinking about the Cybermen’s “final end”, as it were, I started thinking in terms of doing their The Evil of the Daleks… but, argh, talk about big boots to fill, and I needed to keep in mind that first principle – the less they say, the more effective they are. Plus, of course, I wanted to make sure that the earlier part of the story was focused on bringing the Sixth Doctor, Jamie and Zoe together, and letting them do the talking; that’s what the ‘Locum Doctors’ concept was all about. So out of necessity, I started thinking in terms of a first act which was essentially a three-hander; a second with the Cybermen lurking in the shadows, threatening to strike; then a huge, epic ‘Evil of the Cybermen’ finale in the third act!

But I also needed to represent humankind, somehow – the winners of the Cyberwar. Who’d be wielding those glitterguns? ‘Glitterguns’ are such a strange, retro idea, I started thinking in terms of strange, retro sci-fi. Not long ago, after my Dad died, I found a single surviving copy of one of his old Eagle comics, buried in his stuff. I’ve always loved Dan Dare and Eagle – he bought the new 80s Eagle every week when it restarted, as much for himself as me, I think. Long story short, I started buying up vast numbers of old 50s Eagles on eBay – the collection I wish he’d bequeathed me, I suppose!

So I already had a brave, square-jawed fighter pilot and his Lancastrian sidekick looming large in my head at the moment I started writing. Only they’d need a bit of an adjustment if it wasn’t going to be a blatant pastiche. I suddenly wondered: “What’s Briggs’s Northern accent like…?”