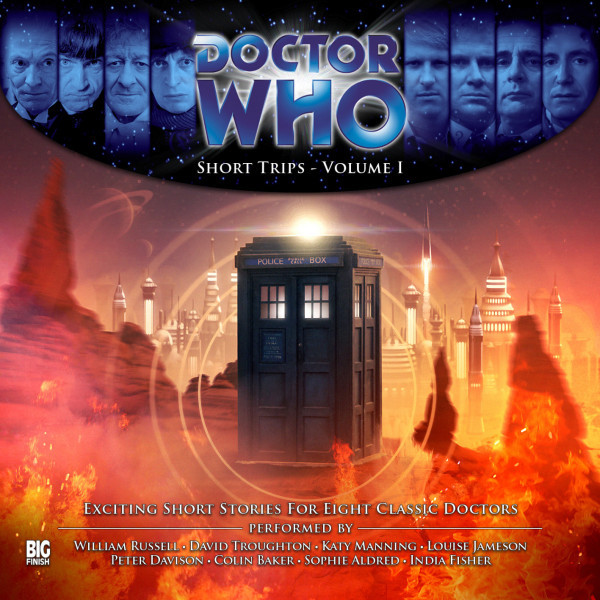 Download
US $9.63
Buy
Save money with a bundle Login to wishlist
20 Listeners
recommend this

Rise and Fall by George Mann
Read by William Russell
On a distant planet, faces bloom in the air for a fraction of a second before disappearing. Will the Doctor and Ian solve the puzzle?

A Stain of Red in the Sand by David A McEwan
Read by David Troughton
Aliens lurk in the corridors of a block of flats, as a sculptor creates a strange statue of a girl called Zoe. But where is the Doctor?

A True Gentleman by Jamie Hailstone
Read by Katy Manning
A young boy finds himself part of the adventure when the Doctor helps him fix his bicycle tyre...

Death-Dealer by Damian Sawyer
Read by Louise Jameson
Leela gets more than she bargained for when she tries to buy a very unusual knife in an alien market...

The Deep by Ally Kennen
Read by Peter Davison
Nyssa's attempts to fix the TARDIS' chameleon circuit land everyone in hot water...

The Wings of a Butterfly by Colin Baker
Read by Colin Baker
A visit to his old tutor leads the Doctor into a closer involvement with the history of the planet Byxor than he may have liked...

Police and Shreeves by Adam Smith
Read by Sophie Aldred
Like all Shreeves, San loves to absorb electricity. But her landlord finds out about her alien abilities. Then the Doctor and Ace get involved...

Running Out of Time by Dorothy Koomson
Read by India Fisher
A young man is on the run. But he can't remember why he is running - or who is following him...

Shop all audiobooks
Next release in this range: Doctor Who: Short Trips: Rise and Fall (DWM promo)