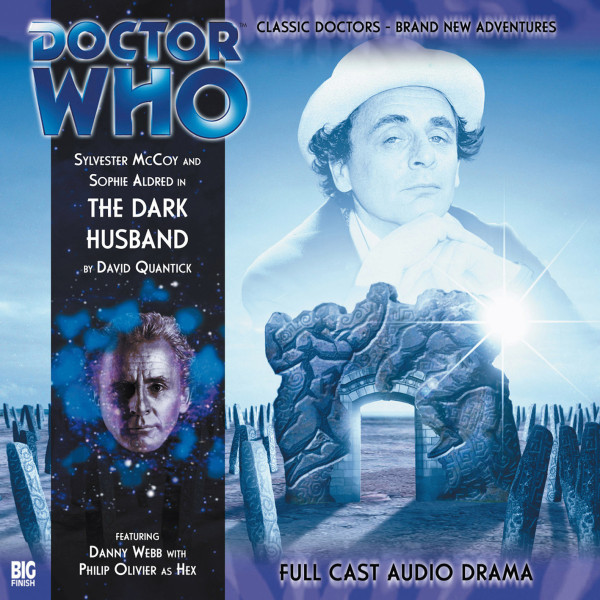 "This whole wedding is like making a nuclear bomb with half the instructions missing!"

A week-long respite from a prolonged and bloody war, the Festival of the Twin Moons of Tuin makes Glastonbury look like a church fete... or so the brochure says. The Doctor and Ace are looking for rest and recreation. Hex is looking for the beer tent. But eternal enemies the ginger-haired Ri and the coot-bald Ir are plotting to turn their Festival truce to their own advantage. Only the Dark Husband might stop the celebrations turning to horror... but who is the Dark Husband? And what terror awaits him on his wedding night?

If anyone knows any just cause or impediment... speak now. The lives of billions depend on it.

Chronological placement:
This story takes place after the television adventure Survival, and after the Big Finish audio adventure Nocturne.

It’s the week before Christmas, and most people are out and about buying their presents. As I arrive at The Moat studios, I’m painfully aware that I’m yet to buy my first gift - there’s just been too much to do. And the world is so busy, in fact, just to get this recording to fit with everyone’s schedules, we’ve had to separate the two recording days - we do half of the story on Tuesday 18th, the rest on Friday 21st. Which is bad news for poor Philip Olivier, who has to travel down from Liverpool and back twice in one week. He doesn’t seem to mind at all, but I can’t help feeling rotten about the fact. And it’s not easy for Sylvester either, who’s in the middle of playing The Fool in a run of King Lear; last night he apparently got to bed at some ridiculous hour, and here we have him working early in the morning, saving the world yet again.

Anyway, here we are on one of the moons of the planet Tuin, in a respite from a centuries-old war. Listen to the finished story and you’d think that the studio was buzzing with people, but today it’s a small band of actors: apart from Sylvester, Phil and Sophie, there’s Danny Webb. Oh, and Sophie has brought her sons in too, so while she’s busy being Ace I’m the acting child minder. Not having kids of my own, I wonder briefly how to entertain them; I start singing songs and they think I’ve gone bonkers. They sit quietly, happily painting and doing arts and crafts. They are, quite simply, the best-behaved children I’ve met in my life.

Star attraction for the day (aside from my singing turn) is Danny, back again so soon after playing Byron in The Girl Who Never Was, simply on the basis that a) he can play anything brilliantly, and b) he’s one of the nicest actors in town. We won’t say too much about what he has to do in the story, because that would spoil it, but let’s just say he’s a very physical actor, even on audio. We’d all be entranced as he’d wave his fists in the air, or strike a pose. Philip thought it was fantastic. When I pointed out in the green room that Danny had taken on a new stance, clenching and unclenching his fists while delivering a line, Phil leapt out of his seat and was in the gallery to take a look. We all thought Danny was stunning.

Three days later, and we were back to Tuin. Sophie’s children weren’t around today, but we had gained the considerably naughtier Sean Connolly and Katarina Olsson, who were playing dual roles as The Bards and the Ir Computers. They were great fun, and absolutely threw themselves into their odd roles. We also had a lot of visitors that day: Peter Ware dropped in to cover it in Doctor Who Magazine, and had so much fun he stayed around for the pub in the evening. Grant Kempster, who was designing the CD cover, dropped in to see the story in the making; he did a quick sketch of what he thought it should be. In the end, that sketch became pretty much what you see in the CD centrespread instead.

And Toby, the studio engineer and the unsung hero of the Audio Adventures of Doctor Who, catered in the Christmas spirit. There was a fabulous buffet, endless mince pies and crackers - everyone got into the spirit of the occasion, and you’ll see from the photos that it was quite a party.

David Quantick delivers a cracking good story that never stops and never plods... This is wicked!